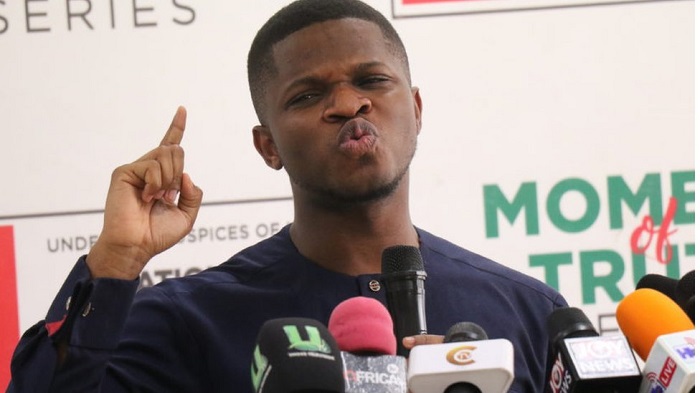 Communications Director for the National Democratic Congress (NDC) Sammy Gymafi has denied reports that the party is begging to return to Peace FM's Kokrokoo show.

The NDC announced a boycott of the popular show hosted by celebrated broadcast journalist Kwami Sefa Kayi after the party complained about the conduct of its former Central regional chairman Bernard Allotey Jacobs on the show.

The NDC also accused the show host of being bias towards the party.

Editor in chief of the New Crusading Guide, Abdul Malik Kweku Baako who is a regular panellist on the show last Wednesday dropped a hint that the party wants to return to the show.

Baako said he had picked up information that the NDC wants to come back through the back door by asking the station to write to the party as if Peace Fm needed the presence of the main opposition party, a move the station was not ready to acquiesce.

“A bird has whispered into my ears that our friends want to come back”, Baako dropped the hint.

However, there were reports this week that the party wants to return to the show but Sammy Gyamfio has come out to deny.

In a post on Twitter, the maverick politician said : For the records, the NDC has never and will never beg to appear on Peace FM’s Kookrokoo. The Comm. Bureau that I lead, does not intend to ever return to that show. The NDC brand is far greater than that overhyped platform. Our boycott still stands. Ignore the lies. #BaakoLied 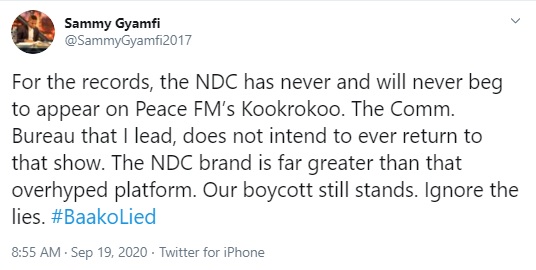 The NDC when boycotting the show in May this year said: “This decision has been occasioned by the unfair panelling system that the production team of that programme has continuously foisted on the NDC over a number of months”.

“Specifically, the reason for this boycott has to do with the unreasonable decision of the producers and host of the programme to permanently reserve one of the two slots the party has traditionally had on Wednesdays on the show to Mr Allotey Jacobs, who is often introduced by the host of the programme as a ‘social commentator with strong leanings to the NDC”, ostensibly to spite the NDC”, the statement said.

It continued: “All efforts to get the producers and host of the programme to give us a fair representation on the show over the past eight months, including a complaint to the management of the station for an amicable resolution of this matter, have proven futile, as the party continues to be treated with utmost contempt”.

“This unfair treatment”, the NDC complained, “flies in the face of the long-standing tradition of the programme, which allocates two slots each to the NDC and the NPP on Wednesdays and Fridays, respectively”.

The statement noted: “Although we appreciate the production and editorial discretion of the station to give their platform to whoever they deem fit, we consider it unfair for the NPP to maintain their two slots on Fridays while the NDC’s two slots on Wednesdays are reduced to one, to satisfy the whim of a dictatorial host and his poodle”.

“In protest to this flagrant disregard for fairness by the host and production crew of the programme, the National Communication Bureau of the NDC has decided to cease the placement of party communicators on the ‘Kookrokoo’ show forthwith. All communicators, media monitors, members, and officials of the NDC are hereby entreated to refuse any invitations and/or interviews from the said programme, until the station addresses our concerns and reviews their unfair panelling system”.