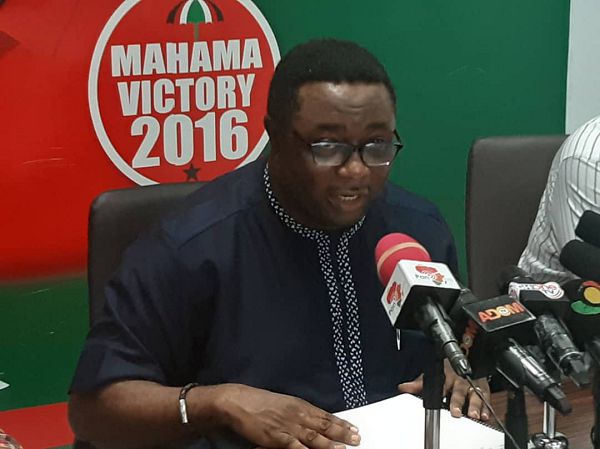 It followed the sanctioning of the primaries by the Functional Executive Committee (FEC) of the party.

The decision was taken after a successful meeting by the FEC to settle disputes that caused the elections in those constituencies to be put on hold.

The party had earlier on August 24, 2019 held parliamentary primaries in 157 constituencies across the country, where 524 aspirants were cleared to contest.

There were no elections in 39 other constituencies where incumbent Members of Parliament (MPs) or aspirants contested unopposed.

A statement issued and signed by the Director of Communications of the party, Mr Kakra Essamoah, said the clearance was given after the scheduled FEC meeting in Accra on October 15, 2019.

The rest, which are all in the Ashanti Region, include Fomena, Odotobiri, Manhyia South, Manhyia North, Nhyiaeso, Asokwa and Tafo.

Out of the 49 aspirants who are contesting in the four regions, nine are going unopposed.

For Akwatia, Henry Boakye Yiadom and Erasmus Koney Ali will be seeking the mandate of the delegates while Rev. Alfred Osei-Poku and Joshua Asumeng Badu will contest for Ofoase/Ayirebi, with Richard Roland Acquah, Kwame Sakyi and Eric Amankwah vying to represent the NDC at Asene Manso Akroso.

In the Ashanti Region, where the contest will be in 14 constituencies, the aspirants for Manhyia North, Hamza Swallah; Manhyia South, Suleyman Abubakar; Nhyiaeso, Richard Prah; Suame, Francis Dodovi, and Odotobiri, Emmanuel Obeng-Agyemang, are going unopposed.

However, in the Fomena constituency, Robert Owusu Tilton will compete with Christiana Ama Ranson Balabu for the votes of the delegates, with Amoh Katmel, Dorcas Dufie Osei Boadu and Anwel Ahmed Sadat battling for the candidacy of Fomena, while the Tafo seat will be a straight fight between Abubakar Umar Alhassan and Sahmudeen Mohammed Kamil.

Still in the Ashanti Region, Stephen Yeboah, Oforiwaa Sakina and Yahya Abubakar Sidiq will be aiming for the votes from Atwima Mponua. Two women, Patricia Ayombil and Grace Asamoah will battle it out at Atwima Kwanwoma, with Vivien N. Nuzagl and Patricia Pearl Ankrah facing each other at Afigya Kwabre South.

In the Mampong constituency, Binta Fatimah Mohammed will be vying for the votes of the delegates with Frank Amoakohene and Mohammed Kojo Aboasu. Alex Kwame Bonsu, Michael Afrane and Alhaji Osman, battle for the Manso Nkwanta seat, while Khaluid Alhassan Kusi and Eric Asibey will be seeking the mandate of the delegates for Kwadaso.

Messrs Victor Yankson and Henry Kweku Borsie Ghartey will contest for the candidacy of Effutu.

Fifty-four more constituencies will be left to hold their parliamentary primaries.