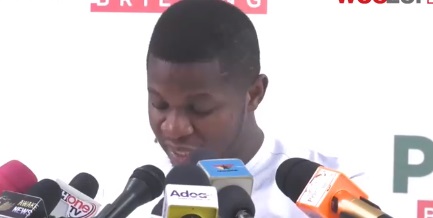 The National Democratic Congress, NDC has pointed out projects they believed the governing New Patriotic Party lied about to Ghanaians.

The NDC said the NPP captured non-existent infrastructural projects as part of its achievements.

According to the NDC, it’s fact-check on the Vice President, Dr. Mahamudu Bawumia’s presentation on the NPP government’s infrastructural achievements show there were a number of “ghost” projects captured.

Addressing journalists on Monday, August 24, 2020, the NDC’s National Communication Officer, Sammy Gyamfi outlined some of what they term as ghost projects which have been uploaded on the government’s delivery tracker website.

“The government’s delivery tracker has it that, a rural electrification project has been undertaken at the Mpataban township in the Asante Akyem Constituency in the Ashanti Region. This is a lie. No such project has been undertaken by this government. No electricity has been extended to that township. There is no truth in that. The people sleep in darkness. So that claim by the government delivery tracker is a ghost project. It doesn’t exist. Again, they claim on the government’s delivery tracker of having constructed the Asuoso to Derma Tekyimantia road in the Bono East Region is yet another palpable falsehood as no such road exists.”

“There is no road by that name in the Bono East Region. So this is a clear ghost project which has been counted as part of the over 17,000 so-called projects they claim they have delivered. That should let you appreciate the fraudulent claims they [NPP] have made in this country. The claim by this government of the re-roofing a cluster of schools at Akantan in the Eastern Region is another lie. No such project has been undertaken,” Sammy Gyamfi said.

Vice President Dr. Mahamudu Bawumia disclosed at a town hall meeting that, out of 17,334 infrastructural projects initiated by the Akufo-Addo government in various parts of the country, 8,746 of them have been completed while the remaining are ongoing.

Dr. Bawumia made this known at the government’s 3rd town hall meeting and results fair held at the Ghana Academy of Arts and Science on Tuesday, August 18, 2020.

The Vice President said the projects are in sectors including sanitation, agriculture, education, security, and sports.

He noted that plan for the development of all the infrastructural projects was informed by a study done by the NPP ahead of the 2016 elections and formed the basis for its manifesto.

He added that the initiated projects are targetted at meeting the needs of poor and deprived communities while contributing to the economic growth at the macro level.