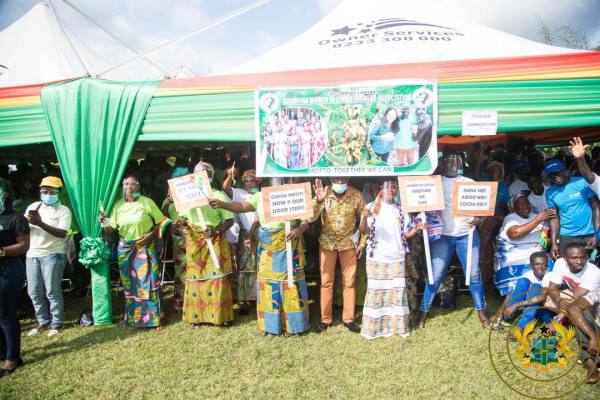 President Akufo-Addo says successive administrations of the New Patriotic Party have been noted for coming up with innovative policies and interventions in the cocoa sector.

According to President Akufo-Addo, “from the eight years in office of that outstanding Ghanaian statesman, the 2nd President of the 4th Republic, His Excellency John Agyekum Kufuor, to the three and half years of Nana Addo Dankwa Akufo-Addo, we have been noted for coming up with innovative policies and interventions in the sector.”

Cocoa Pest and Disease Control (CODAPEC) and Hi-Tech (fertilizer), the President stated, were introduced under President Kufuor between 2001 and 2008.

Speaking at the ceremony to launch the Cocoa Rehabilitation Programme, on Thursday, 24th September 2020, at Sefwi Wiawso, on day 1 of his 3-day tour of the Western North Region, he stated that his Government has introduced programmes aimed at sustaining the industry, and improving the livelihood of cocoa farmers and their dependents.

These policies include re-tooling and deepening of the Cocoa Disease and Pest Control Programme (CODAPEC); streamlining of the HI-TECH Programme to ensure equal access to fertilizers and other farm inputs; facilitating the formation of cocoa farmer groups and cooperatives across the country, which have seen more than three thousand (3,000) of them registered with the Department of Co-operatives; and introduction of the new early or spring mass spraying policy;

President Akufo-Addo told the gathering that, since his assumption of office some three years and nine months ago, “I am happy to state that we have not relented in our quest to give the cocoa industry the necessary boost and facelift it deserves.”