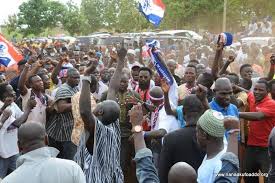 A member of the communication team of the National Democratic Congress (NDC) in the Suhum constituency of the Eastern region has been hospitalised after allegedly being attacked by supporters of the New Patriotic Party (NPP).

According to reports, he was hauled out of his bed and beaten to a pulp while his wife looked on.

This was as a result of clashes between supporters of the two political parties on Monday night at Suhum which left many injured.

The clashes worsened at the Suhum Government Hospital where the injured had been taken to receive treatment.