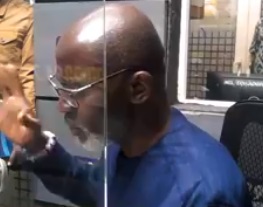 A leading member of the NPP, Gabby Otchere-Darko in an interview says the country's measurement for infrastructural development should not be on only monumental projects.

Speaking on Asempa FM's Ekosiisen on the ongoing infrastructural debate between the two leading political parties, NPP and the NDC, he said monumental things should not be the only measure for infrastructural development.

He explained that there are Ghanaians in the rural areas who needed the toilets being built by the government and also the boreholes because they do not have water to drink.

So limiting the measurement for infrastructural development to only monumental things will be problematic.

"Our understanding and appreciation of infrastructure must not be limited to monumental things."

" Building of a terminal 3 is good but that should not be the only measure of infrastructure things."

Touting the infrastructural achievements of the NPP, he said former President and the flagbearer for the NDC, John Mahama has added projects of the Mills and Kufour administration to his achievements.

He noted that even with that the Akufo-Addo administration still stands tall in terms of infrastructural achievements.

Defending the NPP on concerns raised that they have borrowed more than the previous government, Gabby Otchere-Darko said these monies were used to pay legacy debts, energy sector debts and the cost of the banking sector crisis.

Vice President Dr Mahamudu Bawumia this week admitted that there are some errors in the data entry for some of the infrastructure achievement of the government.

According to the Vice President, these errors are things that can be easily corrected.

He stated on Peace FM that the 26 projects described by the NDC as ghost projects can be interrogated because they are always economical with the truth.

Dr Bawumia said even the 26 projects cannot negate the work of the government.

The National Democratic Congress, NDC pointed out projects they believed the governing New Patriotic Party lied about to Ghanaians.

The NDC said the NPP captured non-existent infrastructural projects as part of its achievements.

According to the NDC, it’s fact-check on the Vice President, Dr. Mahamudu Bawumia’s presentation on the NPP government’s infrastructural achievements show there were a number of “ghost” projects captured.

Addressing journalists on Monday, August 24, 2020, the NDC’s National Communication Officer, Sammy Gyamfi outlined some of what they term as ghost projects which have been uploaded on the government’s delivery tracker website.

“The government’s delivery tracker has it that, a rural electrification project has been undertaken at the Mpataban township in the Asante Akyem Constituency in the Ashanti Region. This is a lie. No such project has been undertaken by this government. No electricity has been extended to that township. There is no truth in that. The people sleep in darkness. So that claim by the government delivery tracker is a ghost project. It doesn’t exist. Again, they claim on the government’s delivery tracker of having constructed the Asuoso to Derma Tekyimantia road in the Bono East Region is yet another palpable falsehood as no such road exists.”

“There is no road by that name in the Bono East Region. So this is a clear ghost project which has been counted as part of the over 17,000 so-called projects they claim they have delivered. That should let you appreciate the fraudulent claims they [NPP] have made in this country. The claim by this government of the re-roofing a cluster of schools at Akantan in the Eastern Region is another lie. No such project has been undertaken,” Sammy Gyamfi said.