Over 2000 ‘schools under trees’ have been replaced- President John Mahama 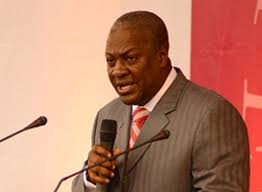 President John Dramani Mahama said his administration managed to replace over 2000 dilapidated schools across the country.

In his last State of the Nation’s Address today, he said the National Democratic Congress (NDC) achieved historic heights with regards to education.

“There was national dissatisfaction about the decline of education at the basic and secondary level following lack of access which meant that many children were being left behind, shortage of professionally trained teachers, absenteeism and shortage of core text books, dilapidated schools, lack of computer labs manifested in declining results in BECE and WASSCE”, he stated.

With the distribution of free text books he said, children have access to all text books and no longer share and in excess of 2000 dilapidated schools popularly referred to as schools under trees have been replaced.

The NDC’s vision according to the President, was not only improve access to education but also improve quality of education.

“The country witnessed significant improvement in educational outcomes. More children than ever before in our history are having access to education at the basic and secondary levels,” he added.

“Teachers are more available and more evenly distributed than has been the case in the pass. Teacher absenteeism is down from 27 percent to below nine percent.”

This he said has led to more engaging hours between teachers and students and the construction of 47 Community Day Senior High Schools means that more students are able to complete their education beyond the basic level instead of dropping out of school.

He stressed that the investments are yielding results and reflecting in the performance of the students at both BECE and WASSCE has seen remarkable improvement.

“The very last batch of BECE students recorded the highest number of students obtaining a raw score of about 500 marks in the history of these examinations,” he explained.

In addition he said, performance in public schools has improved as many rural and public schools are outperforming some of the better known urban and private schools.

President Mahama said, Ghana has consistently over the past three years taken the first three spots in WASSCE,

“The Progressively Free Secondary Education Programme under which we have absorbed the major fees paid by day students has this year been extended to cover 140,000 boarding school students.”

At the tertiary level, he said the construction of additional public universities in the Brong Ahafo and Volta region have improved access to university education while other facilities were improved at other universities to improve upon education.

He urged the President-elect to continue with the projects they have started with regards to the sector.