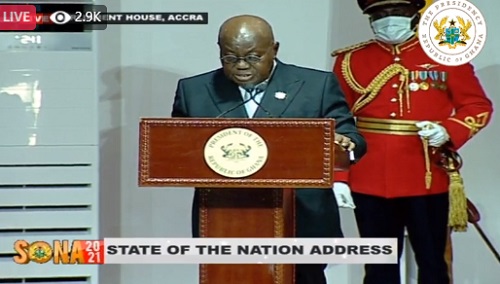 President Akufo-Addo has described as well-reasoned and excellent the verdict given by the seven-member justices of the Supreme Court on the election petition filed by Former President John Dramani Mahama.

Delivering his first state of the nation address in his second term on Tuesday, March 9, Mr Akufo-Addo said the judgment was “Well reason and excellent of the Supreme Court presided over by the Chief Justice on 4 March.”

A seven-member of the Supreme Court has on March 4 dismissed former President John Mahama’s suit challenging the 2020 election results.

Mr Mahama who re-contested the election on the ticket of the National Democratic Congress (NDC), took the Electoral Commission to court, challenging the validity of the Commission’s 9th December 2020 declaration of Nana Addo Dankwa Akufo-Addo as the winner of the poll.

1. Whether or not the petition discloses any cause of action – that is if there is any legal grounds for the petition,

2. Whether or not the 2nd Respondent [Nana Addo Dankwa Akufo-Addo] met the Article 63 (3) threshold of the 1992 Constitution – this constitutional provision states that a presidential candidate must obtain more than 50 per cent of the total valid votes cast to be declared as President-elect,