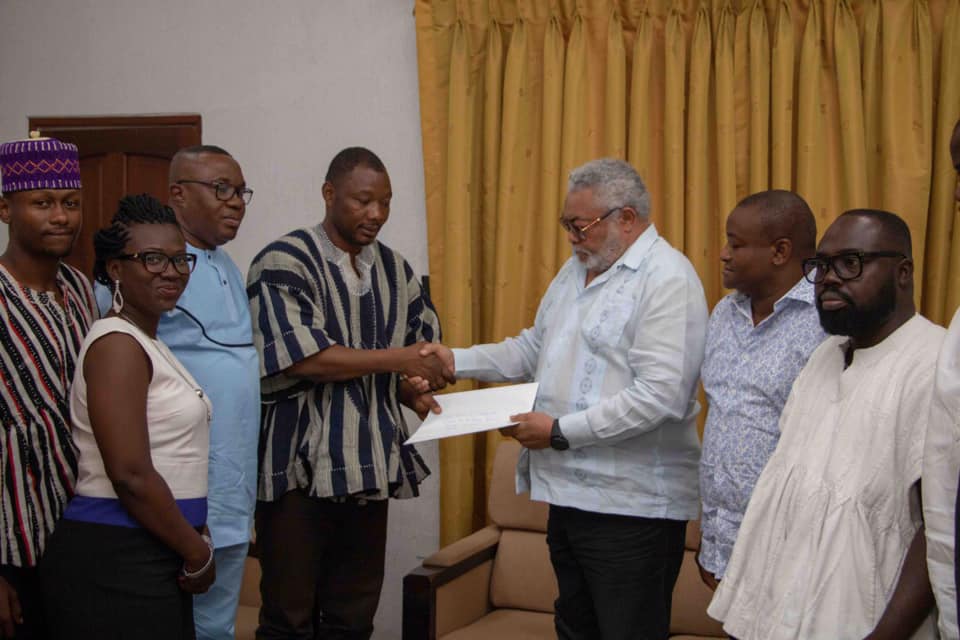 Former President Rawlings says the current mistrust in the country over the compilation of a new voters' register could sour the 2020 general elections.

The former President said this when the Inter-Party Resistance Against New Voter Register (IPRAN) petitioned him to seek his counsel in their quest to stop the Electoral Commission from compiling a new register ahead of the 2020 elections.

A delegation of the coalition, led by Peoples National Convention (PNC) National Chairman, Bernard Mornah, who met the former President at his office on Tuesday, said the Electoral Commission’s “refusal to listen to wise counsel particularly from persons who have participated in the electoral process for a very long time has led to very painful but wrong decisions”.

Detailing the group’s stance against the Electoral Commission’s proposal, the PNC Chairman said during the last local government elections there was a 0.6 failure rate with the use of the existing biometric equipment and questioned why based on such a high-efficiency rate, the Commission would wish to replace equipment and also do away with 17 million names in the voter database.

Mornah said Civil Society organisations had gone into the market and done an assessment of the features the Electoral Commission intends to introduce and realized that the Commission’s budget of $833 million is 60 per cent above budget.

The IPRAN spokesperson was critical of the Electoral Commission’s planning, stating that it was a waste of resources for the Commission to organize a limited voter registration exercise in 2019 only to turn around a few months later with plans to discard the register it had only recently updated.

The coalition said compiling new voters register in an election year will come at a huge cost to political parties in terms of time and resources.

Expressing concern about the hardline stance of the Electoral Commission, Bernard Mornah noted that during the last limited voter registration exercise when the Commission was informed there were approximately 1,700,000 potential new registrants it estimated for 700,000 persons and decided to use only their district offices for the processes against counsel from the political parties. “Eventually when the registration was done, with all the shortfalls, we registered 1.2milion people, indicative of the fact that if they hadn’t failed to listen to counsel we could have had more people on the new register.”

National Democratic Congress Chairman, Samuel Ofosu Ampofo also expressed concern about the seeming neglect of the Inter-Party Advisory Committee (IPAC) by the current Commission. He said Ghana’s democracy had been managed on consensus-building since 1992.

“Even when the NPP boycotted Parliament in 1992 and did not participate in the election under your leadership (President Rawlings'), IPAC was designed so that NPP outside Parliament can make some input into our electoral laws as we moved into the 1996 elections so that they will also have some say. IPAC has been a time-tested institution. Even though not backed by law, by convention it has helped in shaping the electoral process of this country. Unfortunately, under the new Electoral Commission leadership, engagement with IPAC is not part of their agenda,” Ofosu Ampofo said.

Responding to the petition, former President Rawlings called for patience on both sides and urged the coalition and the Electoral Commission not take entrenched positions.

He urged the coalition to ensure that eminent personalities and institutions such as the former Presidents, the Electoral Commission’s Eminent Advisory Committee and the Council of State are all informed.

“There is so much mistrust that if we do not find a way of dealing with some of these issues, they will remain and sour the atmosphere during the election period. It will keep us very close to an ignition point which will be very unnecessary.

“This coming election is going to be a truly serious thing and nobody must take the process for granted or think they can get away with making the wrong moves. The steps being taken must be transparent so no one has any doubts about the integrity of the process. Whoever wants to win will necessarily have to win by free and fair means,” former President Rawlings, stated.