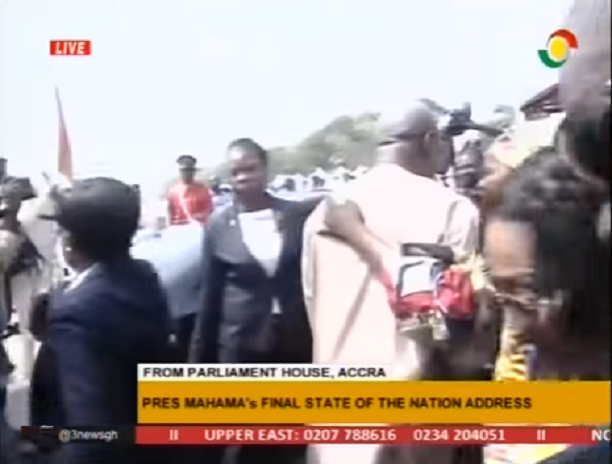 An unidentified woman made a scene Thursday morning on live TV when she hugged and prevented Ghana’s president, John Dramani Mahama, from entering his vehicle after delivering his last State of the Nation Address.

The woman was among several people that Mahama greeted as he made his way to the vehicle.

But this particular woman suddenly gave the president a hug for a few seconds.

As Mahama made to enter the car, the women again held on to him and refused to let go.

This prompted Mahama's security to step in and forcibly remove her.

Meanwhile, a funny spectacle unfolded at the parliament house on Thursday as dignitaries arrived for the last State of Nation Adress (SoNA) by President John Mahama.

Former President Jerry John Rawlings who had arrived at the event and was walking on the red carpet on the staircase into the house embarrassed outgoing Mayor of Accra and MP-elect for Ablekuma South, Alfred Oko Vanderpuije.

Mr Vanderpuije had rushed to greet Mr Rawlings and was trying to walk with him into the building, but Rawlings ordered him get out of his way.