We will not settle for developing world standards- President Nana Addo 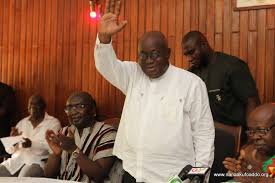 Ghana will not settle for developing world standards but rather use the various talents within the country to develop to the highest level, President Nana Akufo-Addo has said.

The country he said is full of young and exuberant people with the needed skills, mindset and ability to push the nation to the level it deserves.

"We have a exuberant and young growing population that want the best among what the world has to offer and not settle for third world or developing world standard,"he stated in his inaugural speech.

He added that the country have adventurous people and have no doubt that with the talents,energy and innovation of Ghanaians, "Ghana would be a place where dreams come through."

The peaceful transfer of power according to the President is enough evidence that the country has matured and ready to move beyond its current state.