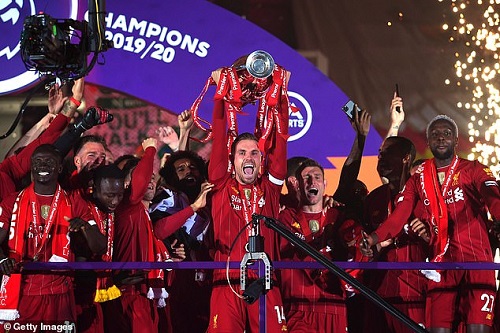 The new Premier League campaign will commence on September 12 after a virtual meeting between clubs confirmed the calendar.

But following the agreement between all 20 shareholder clubs, the new fixture list is set to be unveiled just weeks before the action restarts.

Sportsmail had previously reported that those involved in the top flight were focused on agreeing a prompt start to the new campaign.

Despite the confusion over how the dates will unfold over the next few months, it was confirmed the final match round of the campaign will take place on May 23.

Many within football had initially called for the next season to be pushed back to ensure the current term can be completed amid the uncertainty stemming from the coronavirus pandemic.

But there was no appetite from the Premier League over a lengthy pause, and officials remained aware of the need to ensure the new fixtures line up with leagues across the rest of Europe.

The Premier League has also confirmed it will continue to thrash out the scheduling for the domestic competitions with the FA and EFL.

Clubs were widely expected to give the green light for September 12, which has remained their favoured start date.

It is also believed the Community Shield will be held at Wembley on August 30.