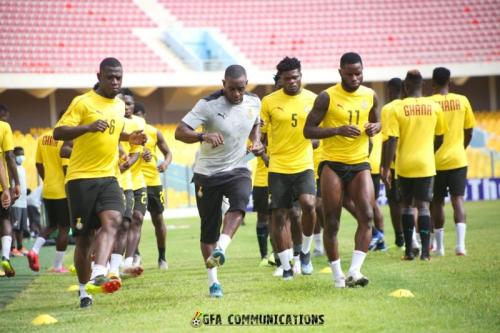 The Black Stars of Ghana will later this afternoon take on Sao Tome & Principe in the final match of the AFCON 2021 qualifiers.

The match which would be played at the Accra Sports at 4 pm will be played behind closed doors.

A statement from GFA said: In line with the Confederation of African Football’s (CAF) directives, fans will not be admitted to the match which will be played at the Accra Sports Stadium on Sunday."

The match will however be live on Ghana Television (GTV).

The Black Stars drew 1-1 with South Africa on Thursday to book a place in the 2021 AFCON which will be played in Cameroon next year.

Coach CK Akonnor’s side is however determined to win Sunday’s game to finish on top of Group C with Sudan also playing South Africa in the other group game.

Also, Minister for Youth and Sports Minister Hon. Mustapha Ussif has charged the Black Stars to top Group C despite booking qualification to next year's AFCON.

Meanwhile, captain Andre Ayew, Vice-captain Thomas Partey and striker Jordan Ayew are expected to feature in today's game after training with the team for the past 2 days.

The three England based players missed the game against South Africa due to issues related to the COVID-19 pandemic as the South Africa has been declared a COVID-19 risk zone by the World Health Organization (WHO).