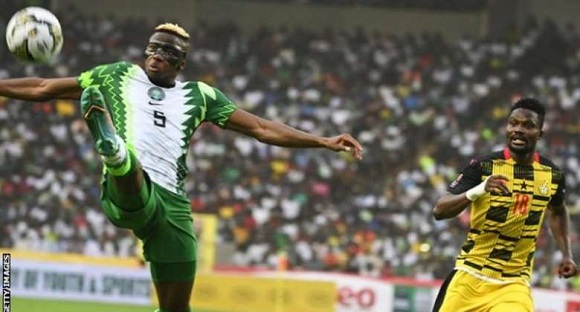 Nigeria Football Federation president Amaju Pinnick says they plan to step in and host the 2025 Africa Cup of Nations - but the Confederation of African Football (CAF) insists the tournament will be staged in Guinea.

Pinnick announced on Tuesday that he had informed Caf executives of Nigeria's interest to co-host the 2025 tournament with Benin during an emergency Zoom meeting.

The political situation in Guinea, under military rule since a coup last year, has led to concerns over security and organization for the 2025 finals.

Some media reports have suggested the event could be moved away from the West African nation, but a top Caf official says neither his organization nor Guinean football officials have discussed such events.

"The host for the 2025 tournament remain Guinea and that has not changed," he told BBC Sport Africa.

"We've not discussed anything about a replacement or received any communication from Guinea about the inability to host. At this very moment, everything is on track for Guinea to host and there is no reason to suggest otherwise."

Organizational issues, a packed football calendar following the coronavirus pandemic, and weather conditions have all forced Caf to alter its schedule for its premier international tournament in recent years.

The 2021 finals in Cameroon were delayed by six months until January in February this year - and then went ahead despite the emergence of the Omicron variant of Covid-19 - while earlier this month it was announced that the 2023 tournament in Ivory Coast will now be played in early 2024 to avoid the rainy season.

Three-time African champions Nigeria want to take on another Nations Cup finals, having co-hosted with Ghana in 2000 and been the sole organizers in 1980.

Winners on home soil 42 years ago, Nigeria lost the 2000 Nations Cup final to Cameroon - an event generally considered to be a success.

Aside from Uyo, the venue for last season's Caf Confederation Cup final, and the refurbished Moshood Abiola National Stadium in Abuja, Nigeria have often struggled to find a decent stadium to host the Super Eagles.

The Lagos National Stadium, which staged the final 2000 final, is being renovated, while dozens of others that dot Nigerian cities have become white elephants - further emphasizing a sad reminder of the country's poor maintenance culture.

As the 2023 general elections loom in Nigeria, Africa's most populous nation is struggling with high inflation, unemployment, power outages as well as an unprecedented wave of different, but overlapping, security crises.

From kidnapping to extremist insurgencies - almost every corner of the country has been hit by violence and crime.

There was also unrest inside the stadium in Abuja after Nigeria lost their 2022 World Cup qualifying play-off against fierce rivals Ghana, with the pitch invaded, dugouts overturned, and visiting supporters, players, and officials pelted with missiles.

Yet Pinnick, also a member of the governing council of the world governing body Fifa, remains confident of the country's ability to stage the 2025 edition with neighbors Benin.

"We are still in the early stage of the whole process," he said.

"As time goes on things will get clearer as to the stadiums Nigeria will present to host the matches.

The last major tournament Nigeria hosted was the Fifa Under-17 World Cup in 2009.