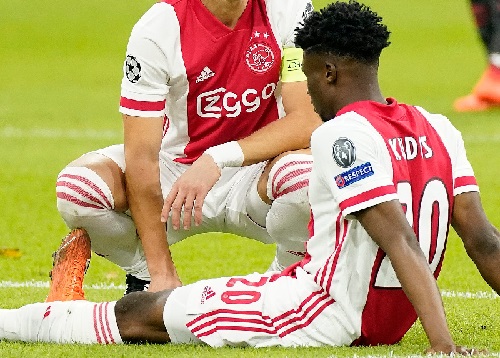 Kudus' Champions League debut against Liverpool in October came to a disappointing end after suffering an injury early in the game.

According to Ajax, the former FC Nordjaelland star suffered a meniscus injury that is expected to keep him sidelined for several months.

And speaking after the Amsterdam club heavy win over PEC Zwolle in the Dutch Eredivisie on Saturday, Erik ten Hag said it won't take long for the Ghanaian to return to the field.

"He is in his final phase of his rehabilitation," he told AD reports.

"There is a chance that he will come into action quickly.”

Kudus is among a long list of Ajax injury absentees from Saturday's game, the others being David Neres, Noussair Mazraoui, Zakaria Labyad, Lassina Traoré, Jurgen Ekkelenkamp, ​​Jurrien Timber and 18-year-old Dutch-born striker Brian Brobbey, who is currently in discussions with Ghana about a possible switch of international allegiance from the Netherlands.

"I hope that some of those players [[injury absentees against Zwolle] will be able to play against FC Utrecht again on Wednesday," ten Hag added.

Kudus joined the Ajax Amsterdam on a five-year deal until June 30, 2025, from Danish SuperLiga club FC Nordsjaelland this summer.

The attacker has put been putting in good performances but the injury. He has featured 3 times in the Eredivisie Divisie, contributing in four goals (1 goal, 3 assists) as well as twice being named the Man-of-the-Match.