An African team can win the World Cup - Samuel Eto'o 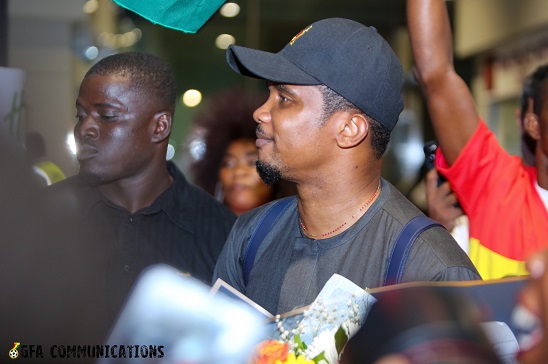 Samuel Eto'o believes an African team can pull a surprise and be crowned champions at the end of the FIFA World Cup 2022 in Qatar.

Eto'o, who is the Qatar Legacy Ambassador believes Africa's five reps, including Ghana and his Cameroon can make a huge splash and even go all the way to win the World Cup.

In the history of the global showpiece, Africa's best performance has been playing in the quarterfinal stage.

The last country to play in the quarterfinal was Ghana in 2010 in South Africa.

"Africa has great football nations, we have the likes Ghana, Cameroon, Tunisia, Senegal and Morocco all going to the World Cup and we are all aware of the fact that Ghana missed the semis by a shot so it is possible," he told Joy FM

Meanwhile, 2022 FIFA World Cup in Qatar will begin a day earlier than originally scheduled allowing the host nation to play the first game when it faces Ecuador, FIFA -- the global governing body for the sport of football have officially confirmed.

Following a unanimous decision by the Bureau of the FIFA Council, the tournament will now begin on November 20 instead of November 21 when three games had been scheduled, with Senegal vs. the Netherlands previously set to open the event.

"The FIFA World Cup 2022 will kick off with an even greater celebration for local and international fans as host country Qatar will now play Ecuador on Sunday, 20 November at 19:00 as part of a stand-alone event," a statement from FIFA said.