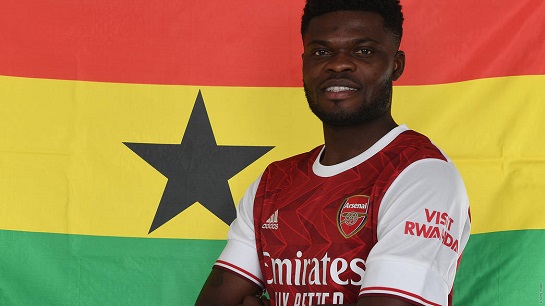 Arsenal manager Mikel Arteta has not ruled out the possibility of new Ghanaian acquisition Thomas Partey playing against Manchester City on Saturday.

Partey could make his Arsenal debut after completing a £45m move from Atletico Madrid on Deadline Day.

The move saw him became the most expensive Ghanaian player in history since Michael Essien's £24.4 move from Lyon to Chelsea in 2005.

The new signing arrived at the Gunners' training ground for the first time on Tuesday after international duty with Ghana and could make his debut against Manchester City.

Arteta says a decision will be made on Partey's fitness after he comes through training sessions on Thursday and Friday.

"Well he was here just yesterday, he is getting familiar with everything around the club," Aretea said. "Today he will have his first training session, so everything has to come really quickly for him."

"We knew that before we signed him that he is fit, he is very willing to start playing and we will see how he goes in the next few days."

"I have seen the buzz around the place, the fans are really happy, I have seen some really positive reactions after we bought him, the same with the team, the squad and the staff. I think he is a player we had the radar on for a long time and we have managed to bring him in and I think he will be a really important addition to the team."

Premier League club Arsenal on Tuesday unveiled Ghanaian midfielder Thomas Partey after he joined on a 5-year contract until 2025.