Benzema on target as Real Madrid ease past Elche 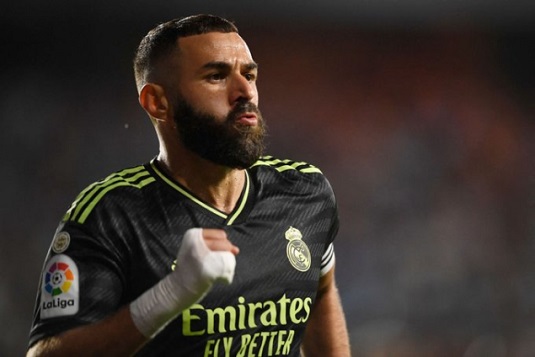 Ballon d’Or winner Karim Benzema scored as Real Madrid extended their advantage at the top of La Liga to six points with victory over Elche.

Benzema linked with Rodrygo before slotting home from 18 yards, having seen two earlier efforts ruled out by the Video Assistant Referee.

Marco Asensio scored a third as Real extended their unbeaten start to 10 games.

Real opened up a three-point lead on rivals Barcelona with victory in El Clasico on Sunday, with Xavi’s side having the opportunity to cut the gap when they host Villarreal on Thursday.

Elche sit bottom of La Liga, and it was a tough night from the get-go with Benzema seeing a goal disallowed for offside in the build-up after six minutes.

Valverde’s left-footed strike from outside the area put Carlo Ancelotti’s side ahead after 11 minutes, before David Alaba and Benzema saw efforts disallowed for offside.

It left Benzema to celebrate his fifth league goal of the season by ironically drawing a square like the referee does during a VAR review.

Asensio’s hooked finish rounded off a lovely free-flowing move by Real, who have won nine and drawn one as they seek to retain their league title.

They have won their first six away league games for only the second time, after the 1991/92 campaign.