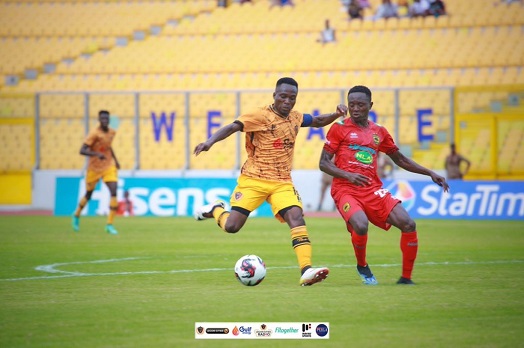 Champions Asante Kotoko would aim to continue with their fine start to the season when they take on Legon Cities on Matchday 7 of the betPawa Premier League later today.

The Porcupine Warriors who are on a two-match winning run have been in scintillating form since their loss to Bechem United.

Asante Kotoko came from behind to beat FC Samartex 2-1 in Kumasi before their 1-0 win over Medeama SC in Tarkwa on Saturday. The Reds have accumulated 13 points in the League and sit in second place – two points behind table toppers Accra Lions who are on 15 points from six League matches.

They come up against Legon Cities who have lost one and won two of their last three matches on the road. The Royals beat Tamale City (1-0) and Real Tamale United (1-0) before picking up a narrow loss to Aduana FC on Matchday 5. They have always been a torn in the flesh of Asante Kotoko – as they beat them 3-0 at the Baba Yara Sports stadium last season.

The match will be live on StarTimes Adepa channel 247.

Meanwhile League leaders Accra Lions have a date with Accra Hearts of Oak at the Accra Sports stadium on Thursday. Accra Lions have yet to lose a game since their opening day defeat to Kotoku Royals at the Cape Coast stadium and will prove a stiffer competition for the Phobians on Thursday.

Lions have beaten Tamale City, Nsoatreman, Karela United, Dreams FC and Bechem United in the run up to the match against the former League champions. Accra Heats of Oak ended their winning run to Karela United following a massive resurgence that earned them two straight wins against Bibiani Gold Stars and Kotoku Royals before settling for a draw with Karela United on Sunday.

In other matches, two former champions Aduana FC and Berekum Chelsea will battle things out at the Nana Agyemang Badu Park while debutants Nsoatreman FC and Tamale City fight for honours at Nana Kromansah Park.

Fresh from their 0-0 draw against Accra Hearts of Oak, Karela United will face off with King Faisal at the Crosby Awuah Memorial Park at Aiyinase. Great Olympics would aim for the points against Real Tamale United at the Accra Sports stadium fresh from their 2-0 loss to Legon Cities as Kotoku Royals lock horns with FC Samartex in Cape Coast.

The Western derby to look forward to will take place at DUN’s Park at Bibiani where Gold Stars host Medeama SC. The fixture between Dreams FC and Bechem Unitec will wrap things up at the theatre of Dreams on Wednesday, November 16, 2022. 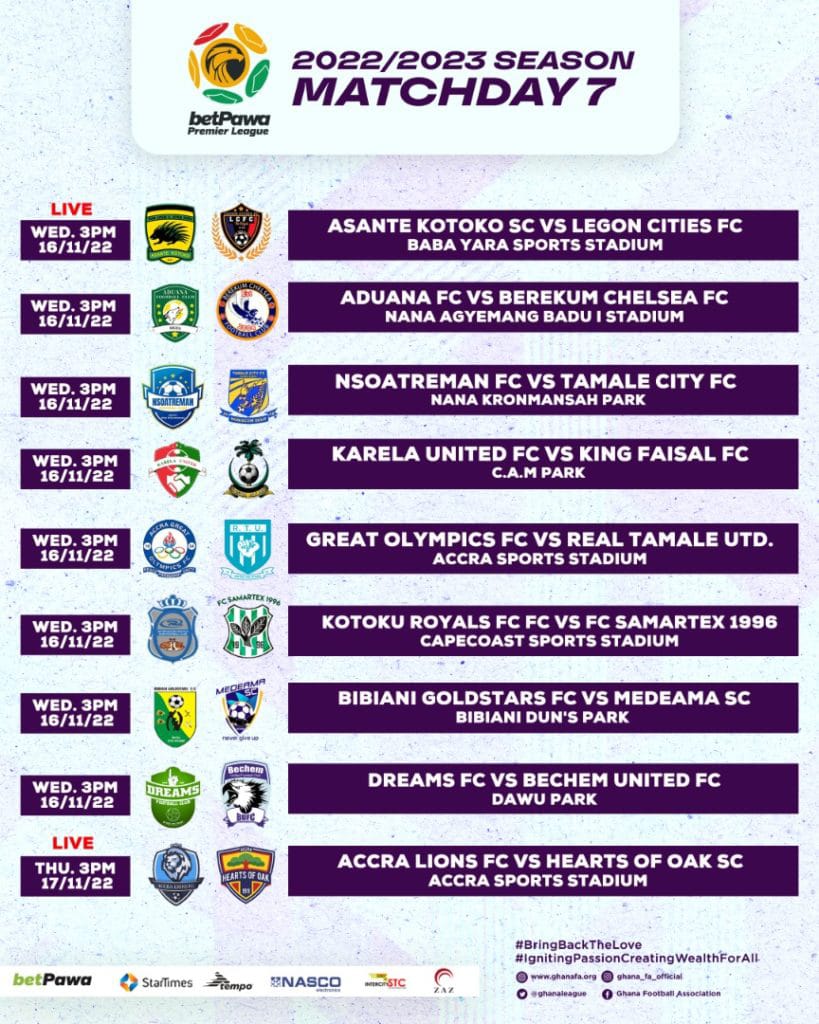