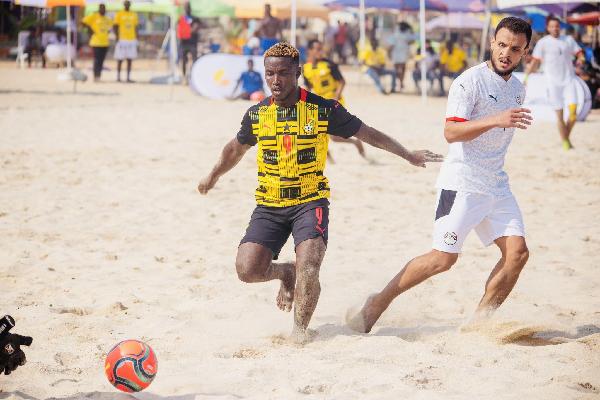 The Black Sharks of Ghana have recorded their first win over Egypt Saturday’s 6-5 victory at the Laboma Beach in Accra.

Ghana’s Beach Soccer national team will go into the second of their 2022 AFCON qualifier with a slight advantage over the Sand Pharaohs, who are North African Beach Soccer champions.

<p>Ghana scored the opening goal just after kick off with a goal from Kinni Ticor before Ibrahim Hassan equalized for the visitors.

The Egyptians however scored their second goal of the game before Richard Osa scored a beautiful overhead kick to restore parity.

The Egyptians jumped ahead once again with a goal from Hattam Mohammed before Ghana skipper Michael Sema equalized.

Eugene Dekpey’s goal then put Ghan ahead just before the Egyptians pulled even through Mohammed Hussein.

Richard Osa was once again on target to put the Black Sharks back in front.

With minutes to the end of the game the Egyptians drew level but Ghan scored a last minute goal to seal the game.

Coach David Kotey’s side will now need a positive result in the return encounter to confirm their qualification to the 2022 African Cup of Nations which will be staged in Mozambique.

The Black Sharks are back in camp and have commenced preparations for the return leg in Cairo.