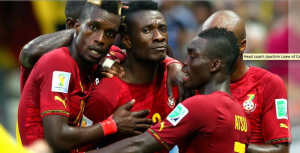 Skipper Asamoah Gyan and Frank Acheampong came from the bench to score to give the Black Stars a 2-0 win over Uzbekistan giants Bunyokdor this afternoon in Dubai.

Coach Avram Grant used the game to test his side as they put finishing touches to their preparations in Dubai.

Gyan scored for the Black Stars with his first touch of the game on 67 minutes before Acheampong extended the advantage with another strike eight minutes later.

Debutant, Bernard Tekpertey was handed a starting role in the game and did a good job though he could not score.

The Stars are likely to play another friendly match before setting off to Gabon on January 13 for the AFCON.