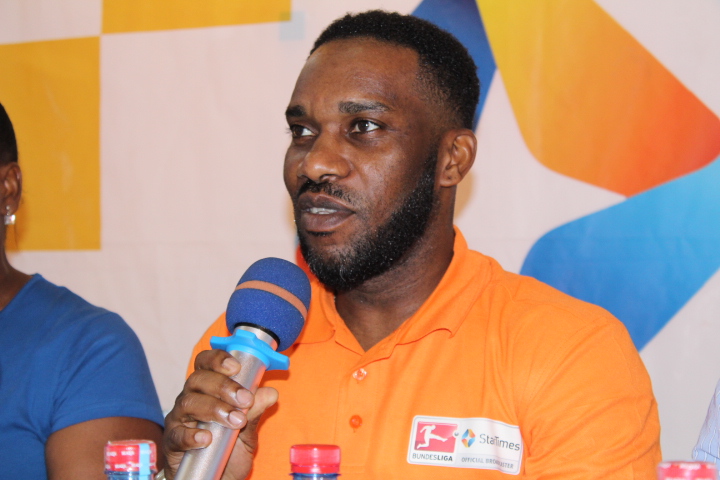 Startimes Bundesliga Ambassador and former Nigerian football star Austin Jay Jay Okocha has challenged the Black Stars to win the next AFCON which begins in January in order to salvage their image in the eyes of Ghanaians.

Okocha who arrived in Ghana on Sunday courtesy broadcaster, StarTimes and has since been engaged in activities to promote the Bundesliga in Ghana, said it is a must for the Black Stars to win the upcoming AFCON.

The Black Stars have been denied the AFCON trophy since 1982 and would be hoping to win the upcoming one after a very stuttering World Cup qualification matches and losing favour in the eyes of Ghanaians.

“This AFCON in Gabon is an opportunity for the Black Stars to put smiles back on the faces of Ghanaians especially as they are struggling a bit in the on-going World Cup qualifiers and the 2017 AFCON presents them the best opportunity salvage their images.”

He continued by saying “I personally would be supporting Ghana and expect a lot from them at the tournament and hope they would meet up to our expectations.”

He was grateful to StarTimes for bringing the Bundesliga to Ghana and Africa at large, stating that the Bundesliga opened the door for other foreign leagues to come to Africa.

He also praised the Ghana Football Association (GFA) for entering an agreement with StarsTimes for the broadcast of the Ghana league stating that it is a great platform for the GFA to take its product packaging to a different level.

He urged the GFA to leverage on the platform offered by StarTimes by being creative enough to get more endorsement from the corporate world adding and all the benefits that come with collaborating with StarTimes.

Tobias Ross, Manager, International Marketing, noted that the Bundesliga was graced by some great Ghanaian players in the past including Anthony Yeboah, Anthony Baffoe, Samuel Kuffour, Abedi Pele, C.K Akunnor, Gerald Asamoah and the more recent players like the Boateng brothers (Jerome and Kevin-Prince), Baba Rahman and Daniel Opare.

This he said has brought some more excitement to the league with their display of true African soccer which has lightened up the league and made the best the world over.