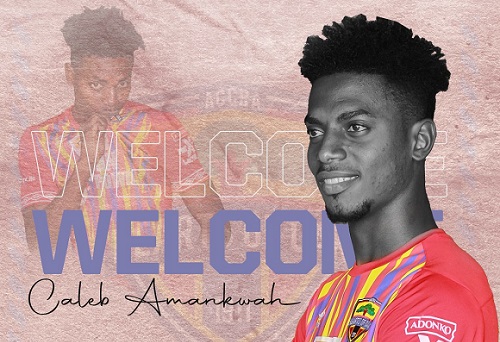 Caleb Amankwah has started his Hearts of Oak career after training at the club's training base in Accra for the first time since his move.

The former Aduana Stars defender who agreed a two-and-half-year deal with the Phobians has begun preparations for the second round of the Ghana Premier League with his new teammates.

Hearts of Oak last month completed the signing of Caleb Amankwah on a free transfer.

The club on Friday, March 12 confirmed that the former Aduana Stars defender has joined the Phobia Family on a two-and-half-year deal.

The versatile defender opted not to renew his contract with Aduana Stars ahead of the start of the 2020/21 season.

Amankwah became the second signing for the club after Ibrahim Salifu joined the Rainbow club from Techiman Eleven Wonders.

He has had stints with West African Football Academy and Aduana Stars Football Club in the Ghana Premier League.