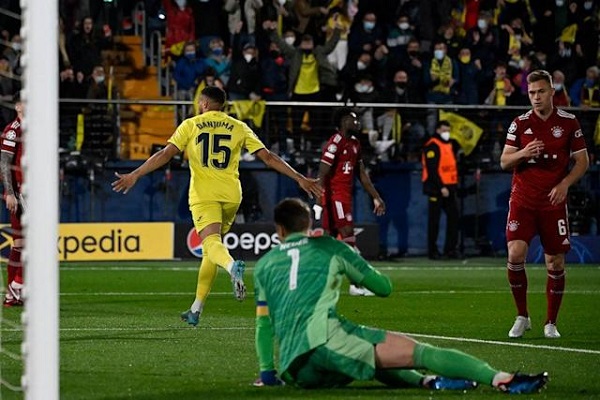 After claiming one of the most memorable results in their recent history in the first leg, Villarreal travel to Bavaria to meet Bayern Munich in the second leg of their Champions League quarter-final tonight.

Arnaut Danjuma's finish sees Unai Emery's side make the journey holding a 1-0 lead from the first leg, with either Benfica or Liverpool awaiting the victor in the semi-finals.

The yellow flags were out in full force at La Ceramica last week, but even though Villarreal prevailed by a one-goal margin on the night courtesy of Danjuma's close-range finish, many fans will feel that the scoreline did not accurately reflect the Yellow Submarine's domination.

Emery's side squandered several opportunities to put the tie to bed in the first leg, with Gerard Moreno hitting the post and failing to catch Manuel Neuer out from the halfway line after his failed clearance, but a 1-0 lead against the Bavarians is nothing to be sniffed at.

Julian Nagelsmann's side could only prevail by that scoreline in their most recent Bundesliga battle against Augsburg - relying on an 82nd-minute penalty from none other than Robert Lewandowski - and suffering a first Champions League defeat away from home since 2017 appears to have rocked the confidence somewhat.

Furthermore, not since the 2014-15 season have Bayern managed to progress in the Champions League after suffering a first-leg defeat, and ironically, their four exits after first-leg defeats since then have all come against sides from La Liga - a very good omen indeed for the travelling party.

However, Nagelsmanns's side enter Tuesday's game having won five of their last six at home in all competitions, and it has been over three years since they last failed to score at least two goals in a Champions League game at the Allianz Arena, but Villarreal have shut them out before.

The step-up to Champions League football following yet another Europa League triumph for Unai Emery last term has been seamless for the former Arsenal boss, whose side certainly demonstrated that they commanded respect after dumping Juventus out of the tournament.

Unfairly written off by some before the first ball was kicked at the Ceramica, Villarreal are now just 90 minutes away from reaching only the second Champions League semi-final in the club's history, which they managed once previously in 2005-06 before falling to Arsenal.

Taking just one point from their last nine in La Liga is doing them no favours domestically though, with Emery's side being held to a 1-1 draw by Athletic Bilbao at the weekend, although the Spaniard did elect to make a full 11 changes for that game with the second leg in mind.

With a spot in the top six of the La Liga table becoming more unlikely by the week, Villarreal will seemingly be forced to go down the Champions League route if they are to return to continental action next term, but winning each of their last three Champions League away games with 10 goals to boot sets them up well for a daunting trip to the Allianz Arena.

Bayern and Villarreal have only ever met once before at the Allianz Arena, with the German side claiming a 3-1 win in the 2011-12 Champions League group stage, and such a performance must be replicated this week lest they let another shot at European glory go begging.

One positive aspect of Bayern's clash with Villarreal for the Bavarians was the long-awaited return of Alphonso Davies at left-back, and Lucas Hernandez will be fine to return from the thigh issue that kept him out of the Augsburg win.

Niklas Sule is still out of contention while he battles with the flu, and Nagelsmann must also work around the absences of Bouna Sarr, Corentin Tolisso and Eric Maxim Choupo-Moting, but it would have been a surprise to see any of them start.

Leon Goretzka was busted wide open in the first leg but was fine to play 57 minutes at the weekend, while Kingsley Coman will also expect a recall to the first XI after an ineffective opening 45 minutes from Serge Gnabry in the Augsburg win.

In contrast, Villarreal remain in good shape for the second leg barring long-term absentee Alberto Moreno, while striker Boulaye Dia is still struggling with his muscular problem and remains doubtful too.