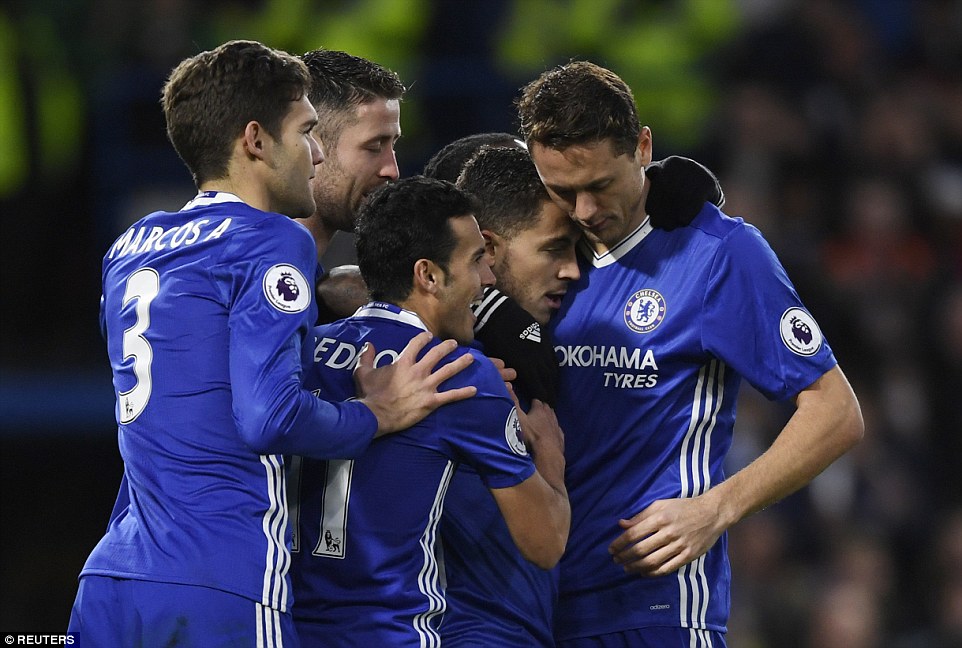 Chelsea was superb against Bournemouth
Shares

No Costa, no Kante, no problem for Chelsea as they extended their winning run to a club-record 12 successive games with Eden Hazard leading from the front.

Hazard responded to the rare opportunity for a run at centre forward with a delightful display of old-school dribbling and ball trickery, capped with a coolly converted penalty which was won by himself.

Pedro had opened the scoring midway through the first-half with a wonderful curling effort and scored his second in stoppage-time with a clinical counter-attack and a deflected finish.

There could easily have been more, with Bournemouth wide open once they went 2-0 down.

Eddie Howe's team took risks to find a route back into the game but Thibaut Courtois produced a couple of fabulous saves to protect his 10th clean-sheet during the 12-game sequence of victories.

Chelsea sit proudly at the top of the Premier League after 18 games and, with Antonio Conte's side in ominously good form, the pressure is firmly on their title rivals.

The only snag for Conte was a yellow card for Pedro, which means he will be banned from Saturday's game against Stoke.

But with confidence soaring at Stamford Bridge and both Diego Costa and N'Golo Kante back after serving their one-match bans it will not trouble the Chelsea boss greatly.

Bournemouth started promisingly but could not stop the momentum.

With Nathan Ake not eligible to play against his parent club Chelsea, Eddie Howe shuffled his squad and settled on a system with three central defenders and a packed midfield, with Jack Wilshere in support of lone striker Josh King.

They resisted well and were patient in possession with flickers of threat but Chelsea dominated and Hazard excelled his central role, which was enough to justify Conte's decision to overlook Michy Batshuayi, still without a start in the Premier League.

Chelsea went ahead midway through the first-half. Hazard found Cesc Fabregas, who threaded a short pass to Pedro. The pass was crisp and accurate but Pedro still had lot to do as he accepted the ball, under pressure on the edge of the penalty area.

He shifted it onto his left foot and clipped a curling shot into the top corner, beyond the despairing dive of Artur Boruc. It is five in nine Premier League games for Pedro, one of the comeback stars of Conte's revolution.

Courtois made a fine low save from Wilshere, who saw another volley deflected wide when he looked well set in front of goal.

Chelsea eased further ahead, soon after the interval, when Hazard was tripped by Simon Francis and referee Mike Jones pointed to the spot.

Bournemouth had been aggrieved by decisions going against them in the first half but this was a foul. When on the ball, Hazard tormented Francis with his quick feet and little explosions of pace. The Belgian picked himself up and sent Boruc the wrong way, claiming his ninth goal of the season.

Chelsea relaxed and started to play some of their most attractive football, with Hazard producing some mesmerising dribbles.

Boruc saved from Willian and both Victor Moses and Hazard fired wide when they might have hit the target.

Howe made a double change in an attempt to salvage something from the final half-hour. On came Junior Stanislas and Benik Afobe and it was former Arsenal striker Afobe who almost pulled on back, escaping David Luiz only to be thwarted by Courtois dashing from his line.

Pedro grabbed his second on the break in the closing seconds, and Conte sent off Batshuayi after the goal. He had been on the pitch for five seconds and did not touch the ball before the final whistle went. Mail Online