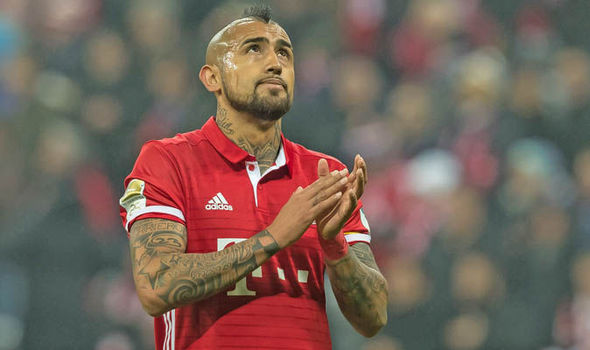 Vidal played under Chelsea boss Antonio Conte for three years during their time at Juventus.

The Chile international is currently in his second season at Bayern after signing from Juventus in the summer of 2015.

He was once linked with a move to Manchester United but a transfer to Old Trafford never materialised.

And Spanish newspaper Don Balon  claim that Chelsea have offered Vidal a deal to move to the Premier League at the end of the season.

It is said that the Blues have an offer of £42million on the table to tempt him to move to Stamford Bridge.

Vidal reportedly wants a new challenge and the chance to link up with Conte could be too good to turn down.

Bayern are unlikely to stand in his way should he express a wish to leave due to the rise of youngsters Joshua Kimmich and Renato Sanches.

However, Chelsea need to keep their end of the deal by securing Champions League football.

The Blues, who are absent from this year's competition after a tenth-placed finish last term, can only entice Vidal with a top four finish.

But they look a good bet to return to Europe's top club competition and currently sit six points ahead of Liverpool at the top of the league table. EXPRESS