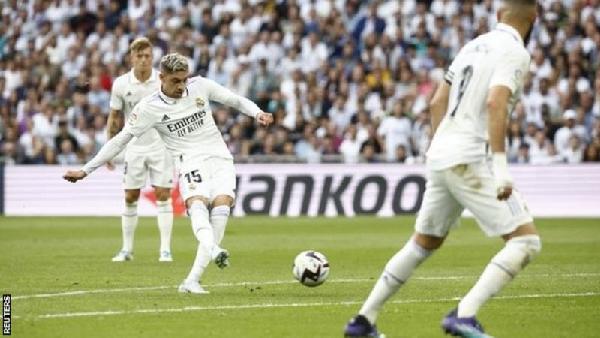 Clinical Real Madrid beat Barcelona in the 250th El Clasico to go top of La Liga and inflict their rivals' first league defeat of the season.

Karim Benzema scored Real's opener after Vinicius Jr's shot had been saved into his path by Marc-Andre ter Stegen.

Federico Valverde doubled the champions' lead before half-time with a lovely 20-yard drive.

Ferran Torres pulled one back from Robert Lewandowski's flick-on but Rodrygo settled it with a penalty.

The rivals started the day with seven wins and a draw from their opening eight games - but Real go three points clear now as they remain unbeaten.

This was a first away La Liga defeat in almost a year in charge of Barcelona for Xavi.

A big loss for Xavi?

Barcelona looked as if they were on their way back to the top of Spanish football towards the end of last season when they beat Real 4-0 at the Bernabeu.

They gambled in the summer by spending a lot of their future earnings on signings. The club hoped it would lead to instant success, which would in turn lead to more earnings.

But they face early elimination from the Champions League - and showed again how they are still behind their old rivals.

This is only their first defeat of the season - and they are still within three points of top spot in La Liga. But this is El Clasico - a game managers dare not lose.

Something for Xavi to think about is how they looked better after bringing on youngsters in Ferran Torres, Gavi and Ansu Fati.

Barca appeared down and out at 2-0 before those introductions. Fati's cross was flicked into the path of Torres, who scored his second Clasico goal at the Bernabeu of the year.

Fati then hit an acrobatic volley which went just wide during their brief hope of grabbing a point - before Rodrygo settled the game.