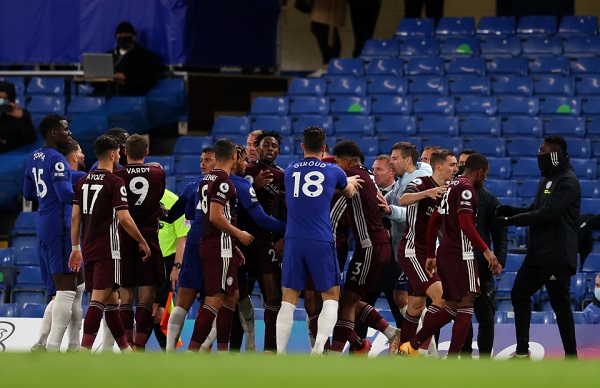 The BluesÂ 2-1 win leapfroggedÂ Leicester City into third spot that puts Thomas Tuchelâ€™s men firmly in the driving seat in the battle to finish in the Champions League places.

The hosts dominated throughout a one-sided first half but couldnâ€™t find the breakthrough. Once again Kasper Schmeichel made some excellent saves while Timo Werner had two goals correctly disallowed for offside and handball respectively.

Chelsea were highly frustrated but finally got the goal they deserved when Antonio Rudiger bundled in Ben Chilwellâ€™s right-wing corner on 47 minutes.

Chelsea added a second via a Jorginho penalty. Kelechi Iheanacho struck for the Foxes but that proved only to be a consolation.

The victory avenged the FA Cup final defeat the Blues suffered on Saturday, after which Leicester defender Amartey was videoed throwing the pennant presented to the Foxes by Chelsea onto the floor of the dressing room at Wembley.

It was viewed as a disrespectful action and Rudiger admitted after last night's win that the incident gave the players extra motivation.

"Unfortunately, some people of them don't know how to celebrate. We had to punish them, 100%," Rudiger told Chelsea's 5th Stand app.

"Some people from them gave us a bit more motivation from Saturday. Congratulations to them, they won and everything. Celebrate and everything but don't disrespect club history. This is a bit bigger than you."

Amartey was also involved in the late brawl on the touchline at Stamford Bridge. Thiago Silva, Cesar Azpilicueta and Mason Mount all clashed with the Ghana international, who was an unused substitute for Leicester.

Tuchel admitted after the game he had not used the incident to spur on his players, although he did accept his squad were very aware of what had taken place.

He said: "I did not talk about it. I know there was an incident but I didn't talk about it before the match or in any meetings, I don't do this but I think the players were well aware.

"I'm not into these things too much because it can sometimes give you too much energy, too much a feeling for revenge. I don't like this at all

"We prepared for a super important match and did what we do, how we play football. We wanted to do it at the highest level possible and this is what we did.

"We needed the intensity and hunger that make us a difficult team to play. There's nothing more I can say about it."