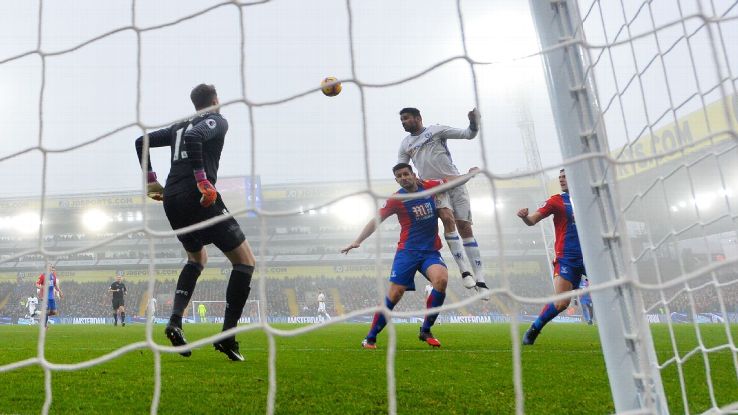 Diego Costa's latest goal proved enough for Chelsea as they worked their way to a 1-0 victory at Crystal Palace.

A year to the day that Jose Mourinho was sacked, Chelsea celebrated an 11th successive Premier League win.

There is little need to look back in anger at their former manager, who is now at Manchester United and trailing in Chelsea's wake. And chasers Liverpool (who play Everton on Monday) and Arsenal (who face Man City on Sunday) will kick off nine points behind a team threatening to become runaway leaders.

Yet this was not quite an anniversary waltz. Crystal Palace, fighting for their lives and perhaps the future of manager Alan Pardew, didn't make life easy for Antonio Conte's team in an encounter unlikely to be remembered as a classic.

Towards the close of a grinding, bitty first half full of niggling fouls, Chelsea at last found their gears. Eden Hazard dropped deep, beat a couple of opponents and then played the ball wide right to Cesar Azpilicueta, who had surged forward from defence. The Spaniard's cross was excellent, Palace goalkeeper Wayne Hennessey hesitated and Diego Costa required little invitation to nod in his 13th Premier League goal of the season.

Earlier, Costa's long wait for a fifth booking of the season, a spell of good behaviour dating back to September, ended after a petulant hack at Joe Ledley as the striker was targeted throughout by angry, frustrated home fans. He will be absent from Chelsea's home fixture with Bournemouth on Dec. 26 through suspension -- so too will N'Golo Kante for the same accumulation -- and they will undoubtedly miss the supreme aerial power he showed in scoring that ice-breaker, as well as his expertise in leading the line.

Before Costa's goal, referee Jon Moss had been the game's most central figure: Hazard was a regular recipient of heavy treatment as Chelsea laboured to find their flow. Palace mounted promising attacks, with Jason Puncheon missing their best chance, James McArthur heading wide and Puncheon unable to keep a free kick down.

Their threadbare confidence might have been sapped by Costa's goal and the lapse in concentration that had led to it. Instead, to their credit, Palace pushed on with genuine determination, with Chelsea's usual defensive three converted into a bank of five. Chances came and went for both teams, with Yohan Cabaye's drive saved well by Thibaut Courtois and both Kante and Marcos Alonso going close for Chelsea.

Alonso later crashed a free kick off the crossbar as Chelsea pushed for a decisive second goal. Instead, their defence, which has conceded just twice during that 11-game streak, held out to complete the job.