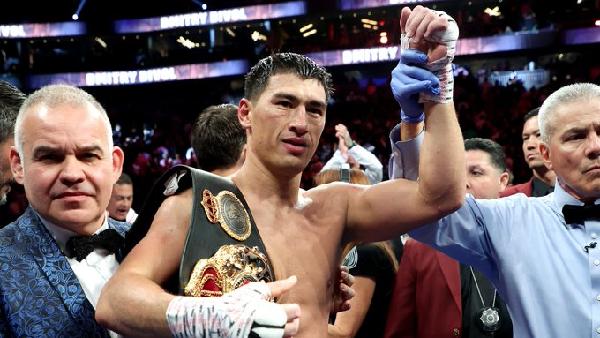 Alvarez, 31, is the undisputed world super-middleweight champion but he stepped up in weight for the bout and was handed a second defeat in 61 bouts.

All three judges scored the fight 115-113 in Bivol's favour.

"I'm glad I proved myself, I'm the best in my division and I keep this belt," said Bivol. "He's a great champion, I respect him and all his team.

"If you don't believe in yourself what do you do? You achieve nothing. I believe and my team believed in me.

"I felt his power. You can see on my arm, he beat my arm up but not my head. That's better."

Alvarez is rated as the world's leading pound-for-pound male boxer., and his only other defeat was to Floyd Mayweather at light middleweight in 2013.

"You have to accept it, it's boxing," Alvarez said of the loss. "He's a great champion. Sometimes in boxing you win and lose and I'm not giving excuses. I lost and he won."

Asked if he wanted a rematch he said: "Yeah, of course I do. "This doesn't end like this."

Bivol added: "Let's talk about a rematch. I wanted this fight because I wanted to get the opportunity and I appreciate this opportunity.

"I'm ready for a rematch, I just want to be treated as the champion now."

Bivol has held the WBA light-heavyweight title since 2016.

There had been criticism of the WBA's decision to allow Bivol to fight because of Russia's invasion of Ukraine.

Former heavyweight champion Wladimir Klitschko told Radio 5 Live "it is important that this boxer [Bivol] is forbidden from fighting in America, just as all Russian athletes are being banned from international competition".

Boxing's world governing bodies - the WBC, WBO and IBF - responded to Russia's war in a joint statement that committed to blocking "championship fights involving boxers from Russia and Belarus".

But the WBA did not issue a similar penalty.