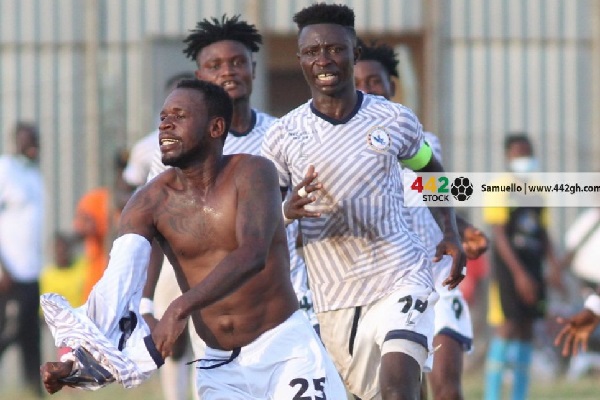 Berekum Chelsea striker Emmanuel Clottey has set his sights on winning the goal king after his late strike against Asante Kotoko.

Clottey over the weekend scored his first goal in the ongoing Ghana Premier League. A goal which secured a 1-1 draw for the home side from a well-struck late free kick at the Berekum Golden City Park.

Speaking after the game, Clottey who emerged the top scorer for Great Olympics in the 2007 Ghana Premer League league with 14 goals revealed that his target is to win the 2020/21 Ghana Premier League goal king.

Asante Kotoko on Sunday were pegged back in the dying embers of the game after taking the lead in the first half.

The Porcupines opened the opening through inform Kwame Poku before their former player Emmanuel Clottey levelled the scores in the 95th minute.

The former Ghana Premier League top scorer rolled back the years to deliver a stupendous free kick from the edge of the box to beat substitute goalkeeper Kwame Baah in post for Asante Kotoko.

The free kick zoomed into the roof of the net to break the hearts of many Kotoko fans who were praying for a win. The porcupine Warriors scored in the first half through Kwame Poku and were kept in the game by goalkeeper Felix Annan.

The result meant both Kotoko and Chelsea are winless in their opening two games.