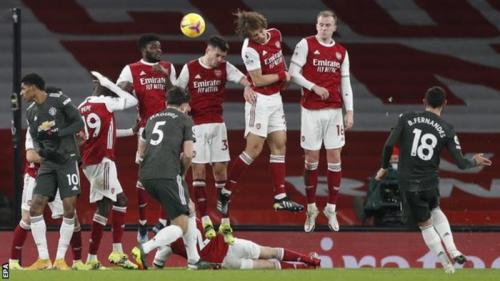 Manchester United dropped points for the third time in four Premier League games with this goalless draw against under-strength Arsenal at Emirates Stadium.

De Gea's counterpart Bernd Leno also distinguished himself with an athletic fingertip save from Fred in the first half.

United came within inches of winning it in the closing stages when Cavani saw a close-range effort deflected wide off Leno and the Uruguay striker then hooked a superb cross from Aaron Wan-Bissaka just wide when he looked certain to score.

Arsenal gave a late debut to Martin Odegaard, signed on loan from Real Madrid, but he had little impact and the stalemate leaves United three points behind Manchester City having played a game more.