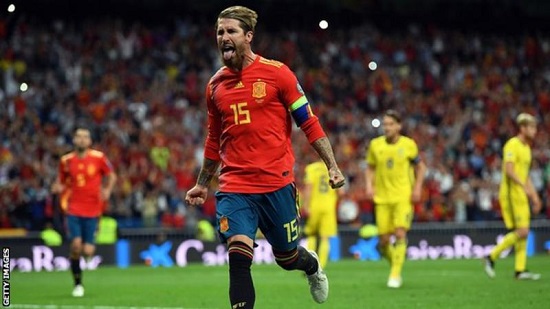 Sergio Ramos set Spain on course for a comfortable victory over Sweden in qualifying for Euro 2020.

The Real Madrid defender, 33, broke the deadlock at his club's home ground, scoring a second-half penalty for his 20th goal from 165 caps.

Spain are now five points clear of Sweden at the top of Group F.

Before the game, Ramos was presented with a commemorative plate after Friday's 4-1 win in the Faroe Islands saw him pass former team-mate Iker Casillas' record for most international wins by a player.

The Porto goalkeeper played in 121 victories from 167 internationals so Ramos is also now two behind Casillas' record as Spain's most-capped player.

The Czech Republic went level with England at the top of Group A as they won 3-0 at home to Montenegro while Kosovo are third after coming back from 2-1 down to claim a dramatic 3-2 victory in Bulgaria, with Elbasan Rashani scoring a stoppage-time winner.

Austria are third in Group G after West Ham forward Marko Arnautovic scored twice in a 4-0 win in North Macedonia, while group leaders Poland beat Israel 4-0 and fourth-placed Slovenia eased to a 5-0 win in Latvia.