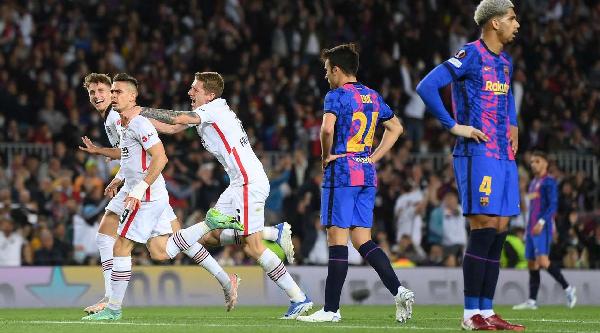 Eintracht Frankfurt produced one of the best nights of football in their history to shock Barcelona 3-2 at the Camp Nou, and progress to the Europa League semi-finals 4-3 on aggregate.

Barcelona got off to a nightmare start, as within two minutes, Frankfurt were awarded a penalty. Jesper Lindstrom was brought down in the box by Eric Garcia, who had his arms all over the Danish playmaker.

Filip Kostic made no mistake from the resulting spot-kick, placing the ball into the far corner beyond Marc Andre ter Stegen to put his side ahead on aggregate.

Nine minutes before half-time, Barcelona’s evening got even worse, as Frankfurt doubled their lead on the night, courtesy of a sublime long-range strike by Rafael Santos Borre.

The Colombian hit an effort from 25-yards into the top corner beyond the reach of Ter Stegen to give Frankfurt a 3-1 lead on aggregate.

The visitors then got their third midway through the second half, as Kostic grabbed his second of the game, placing a shot from the edge of the box into the bottom corner of the net.

Barcelona grabbed a late consolation goal in stoppage time, as a fantastic Sergio Busquets effort from outside the box found the far corner, but it was too little, too late for La Blaugrana even despite a penalty goal from Memphis Depay with the last kick of the match. Frankfurt will go through to face West Ham in the semi-finals.

Elsewhere, West Ham United reached their first European semi-final since 1976 with a clinical 3-0 demolition of Lyon in the second leg of their Europa League quarter-final.

After a 1-1 draw in London last week, Craig Dawson headed home from Pablo Fornals' corner on 38 minutes to put the Hammers ahead on aggregate.

Skipper Declan Rice extended the lead on the stroke of half-time before Fornals turned provider for Jarrod Bowen to bag the Hammers' third within minutes of the restart, a finish which secured a date with Eintracht Frankfurt or Barcelona in the semi-finals.

With a backdrop of electric home support, Lyon began the first half purposefully and came closest to opening the scoring when Karl Toko Ekambi struck the woodwork.

Lyon's inability to finish was punished by a quickfire double from Dawson and Rice which sent the travelling fans into delirium and left the home faithful in stunned silence.

David Moyes’ men began the second half as they finished the first, flying out of the blocks with Bowen netting the Hammers third goal, activating the cruise control setting which ultimately got them over the line.

The final whistle sparked scenes of jubilation and relief among West Ham players, staff and fans alike who are one step closer to the final in Sevilla.

Both sides must switch their focus back to domestic duties now. West Ham will need to climb down from cloud nine and prepare for the visit of Burnley in the Premier League on Sunday. As for Lyon, they’ll need to dust themselves off ready to return to Ligue 1 action when they welcome Bordeaux on Sunday.