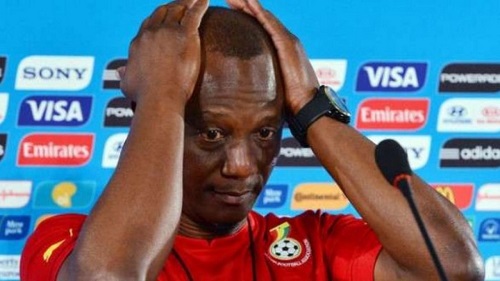 Former Black Stars coach Kwasi Appiah has said he is being treated in a way no white coach in Africa would be as he awaits salary arrears totalling nearly $200,000 from his time in charge of the Black Stars.

Appiah's second spell in charge of Ghana, which started in April 2017, ended at the turn of the year.

The Ministry of Youth and Sports says it will pay the money "soon", blaming the delay on the coronavirus pandemic.

"I was owed money since August 2019 when there was no Covid-19," Appiah told BBC Sport Africa. "Would they owe a white coach for 11 months?"

The 59-year-old, who has previously said he feels 'disrespected' by the way his case is being handled, says he is owed $185,000, most of which covers five months' unpaid salary.

"(My predecessor) Avram Grant was not owed more than a month when his contract ended," Appiah explained.

The reason the Israeli, who led the Black Stars between 2014-2017, was not paid at that time was because he had yet to file a report on the 2017 Africa Cup of Nations on time, but his arrears were swiftly settled once he did.

In recent times, some white coaches in Africa - such as Nigeria's Gernot Rohr - have not been paid on time while others, such as Botswana coach Adel Amrouche, who holds both Algerian and Belgian citizenship, is still awaiting payment from an old job.

Appiah simply wants this practice of late payments should end for good.

"It's not right and should not be encouraged - irrespective of whether (the coach is) local or foreign," he added.

BBC Sport Africa understands that it is not just Appiah awaiting salary for his role with Ghana, but the country's current national youth team coaches as well.

Both the U17 and U23 coaches declined to comment but U20 coach Karim Zito confirmed that he is owed money.

Zito, a former international, was first drafted into the coaching set-up of Ghana's youth teams in 2013 when he was assistant coach for the Under-23 team and says this is a familiar tale.

"We had only collected our salaries for three months when we received a letter stating that we will no longer be paid - no reason was given," Zito told BBC Sport Africa.

"I was appointed as coach of the (Under-20) national team in January this year but I am being owed. I will attribute the failure of to pay our salaries to the coronavirus pandemic."

Kofi Asare Brako, a spokesperson for the Ministry of Youth and Sports, has blamed the failure to pay the outstanding salary on the coronavirus pandemic causing a financial constraint on the ministry.

"The salary of the head coach of the Black stars has always been paid through a sponsorship package, and it is unfortunate this has now dragged into the period of the coronavirus pandemic," Kofi Asare told BBC Sport Africa.

"We are still in touch with the former coach and in no time we will pay him. Soon, all money will be paid to Appiah."

The coach, who also led Ghana at the 2014 World Cup, has told BBC Sport he is prepared to take his claim to football's world governing body FIFA if he does not receive his money soon.

"I gave the GFA a three-month deadline (earlier this year) but neither the GFA nor the Sports ministry have met with me," Appiah said.

"I can say categorically that the chief accountant of the Ministry of Youth and Sports has been in constant communication with Appiah," Brako added.

"We are still in talks with him. If we have to structure a payment plan, we will do that but if he insists we have to pay all at once we have no choice but to do it."

The Ministry of Youth and Sports has not given an exact timeframe as to when Appiah's salary will be paid but Brako assures it will paid 'soon'.

Appiah's contract was not renewed following his team's disappointing outing at the 2019 Africa Cup of Nations where the Black Stars exited in the Round of 16.

Ghana were the first team to ever reach four Nations Cup titles but have not won the trophy since 1982.