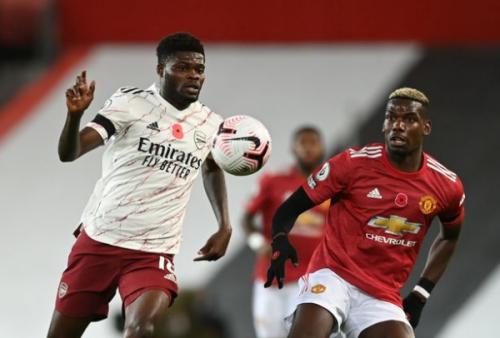 Roy Keane labelled Thomas Partey "outstanding" after the Arsenal midfielder's display against Manchester United, going so far as to compare him to Gunners icon Patrick Vieira.

Partey shone in the 1-0 win against the Red Devils, helping Arsenal dominate in midfield on their way to a first win at Old Trafford in 14 years.

The Ghanaian was making his second start in the Premier League after his £45million transfer from Atletico Madrid on Deadline Day.

With La Liga giants Atletico, Partey won the Europa League and featured in the 2016 Champions League final - so it was no surprise to Keane to see the 27-year-old impress on the big stage.

"He was outstanding. He’s obviously no mug having played in big games," Keane told Sky Sports .

Keane even admitted he would like to have seen United meet Partey's release clause last summer as he continued his glowing verdict.

The former Red Devils captain added: "When you watch a player live that’s when you can judge a player and the more I look at him the more I wish he was in the United midfield.

"He’s big, strong and aggressive – and he can pass it forward. He can deal with the ball."

Partey is expected to be in action when Arsenal host Molde in the Europa League on Thursday.