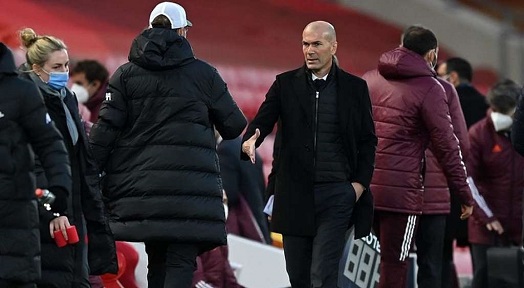 Zinedine Zidane has a shot at winning an incredible fourth Champions League title as a coach after his side showed their dogged side in seeing off Liverpool on Wednesday, while Paris Saint-Germain are confident of making their breakthrough on Europe's biggest stage following an epic win over Bayern Munich.

Here we look at four things from this season's Champions League quarterfinals:

Such was the confident manner in which Real Madrid dealt with Liverpool that Zinedine Zidane has to be favourite to win his fourth Champions League title, which would be a record for a coach.

Zidane is currently tied on three Champions Leagues/European Cups with current Everton boss Carlo Ancelotti and iconic Liverpool manager Bob Paisley, having claimed his hat-trick for Madrid in his first two-and-a-half seasons in a first-team dugout.

His Madrid will be favourites to reach yet another final of the continent's top competition when they face dark horses Chelsea in the semifinals and look ready for a 14th elite European crown.

On Wednesday his team were far from the smooth display that picked apart Liverpool in the first leg last week but a combination of brave defending and poor finishing from the Jurgen Klopp's Reds meant that the Spanish champions were never in danger of being eliminated.

Paris Saint-Germain claimed their biggest ever scalp in the Champions League on Tuesday when they squeezed past European champions Bayern on away goals, and last season's beaten finalists will surely fancy their chances of going one better this year.

"We needed that. We needed to show ourselves that we could beat them, and we did it," said Neymar, who dazzled in both legs of a captivating tie drawn 3-3 with the Bavarians.

PSG's frightening pace on the counter-attack has seen them to stunning first-leg away wins at both Barcelona and Bayern in the knockout stages.

The way the team has banded together to see off European royalty in this year's run suggests Mauricio Pochettino has a real chance of winning the Champions League after missing out with Tottenham in 2019.

Topping the continental pile would be the culmination of a decade's work by PSG's mega-rich Qatari owners, who hope to retain their superstar attackers Neymar and Kylian Mbappe.

"It is obvious that I feel very comfortable here and at home at Paris Saint-Germain. I feel happier than I did before," Neymar told Brazilian channel TNT Sports after helping his team to a clash with UAE-owned Manchester City.

Jude Bellingham announced his arrival on the biggest stage despite Borussia Dortmund being knocked out by Manchester City on Wednesday night.

Aged 17 years and 289 days, Bellingham became the second-youngest scorer in the history of the Champions League knockout stages when he skillfully collected the ball on the edge of the area and curled home a classy strike to level the tie at 2-2 and put the Germans ahead on away goals.

It wasn't enough to see Dortmund through to a semifinal clash with PSG as Riyad Mahrez's penalty 10 minutes after the break and a Phil Foden strike ensured passage for Pep Guardiola's City.

But the England international, who signed for Dortmund from English Championship side Birmingham City for â‚¬26 million in the summer, followed up on his first Bundesliga goal at the weekend to outshine a below par Erland Braut Haaland.

Bellingham looks to be following the path to stardom laid by Dortmund teammate Jadon Sancho, who was plucked from City's youth set-up and is now one of Europe's most sought-after talents.

Thomas Tuchel seemed in a bullish mood after Chelsea dispatched a tough Porto side in the sort of professional manner that belied the youthful nature of his team.

Porto had dumped out Cristiano Ronaldo and Juventus in the previous round with dogged defending but over the two legs of the quarter final it was Chelsea who showed the discipline needed to succeed on the European stage.

"Once you are there you play to reach the final. We need every minute to learn and to grow. You cannot improve without these experiences."