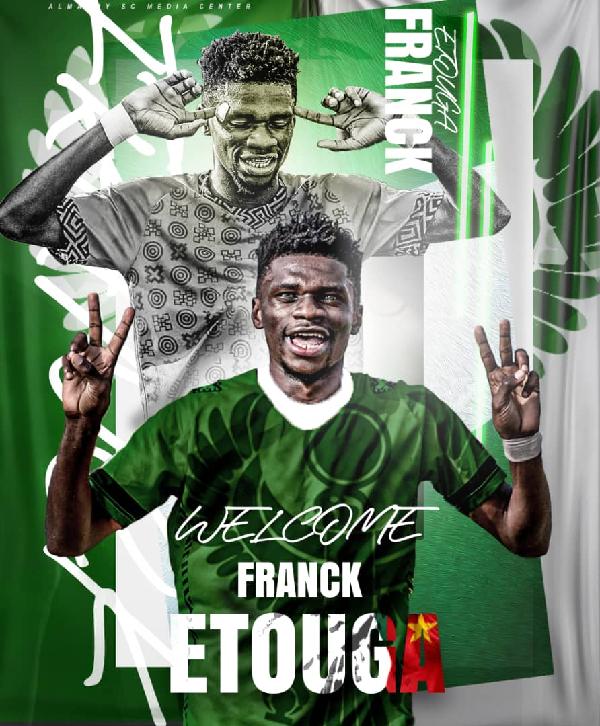 Egyptian side Al-Masry have announced the signing of Kumasi Asante Kotoko striker Franck Mbella Thierry Etouga on a three-year deal.

Etouga joins the Egyptians in a deal worth €400,000 after only one season with the Ghana Premier League champions.

He is also reported to be on a lucrative €25,000 monthly salary while Kotoko will earn 30 percent of any onward transfers he makes from Al-Masry.

"The Egyptian Club Board of Directors, headed by Professor Kamel Abu Ali, have completed the signing of Cameroonian international striker Frank Mbela Itoga, the head of Ghana's Ashanti Kotoko, on a three-season contract, starting from the new season 2023/2020 to the end of the 2025/2024 season," the club said in a Facebook post.

"After receiving player's leave from Ashanti kotoko after Payment of the value of the deal, Mr. Kamel Abu Ali, the chairman of the Egyptian club and Mr. Yasser Yahya, a member of the board of directors of the club, have recently received the signature of the player, who had arrived in the early hours of this morning in Cairo".

Etouga joined Kotoko from Camerounian side Fortuna du Mfou and went on to become a fan favourite, scoring 22 goals as the Porcupine Warriors won the league.

He was pipped to the golden boot by Yaw Annor who scored 23 goals.