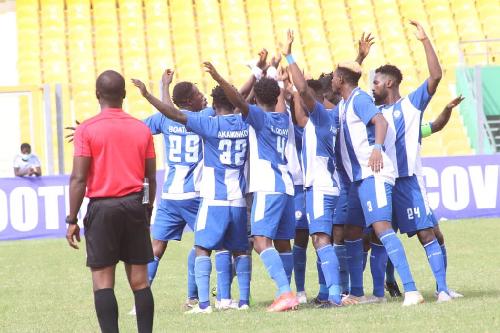 Accra Great Olympics silenced their city rivals Accra Hearts of Oak 3-0 in the penultimate match of the season at the Accra Sports stadium on Sunday.

The win has now increased their chances of finishing in the top four after moving to the 6 spot with 47 points – 2 points adrift of 4 placed Karela United. Yussif Abdul Razak grabbed a brace for the Dade Boys before Amos Acheampong added the third goal to sink Hearts of Oak in Accra.

In Berekum - Sylvester Simba gave Dreams a priceless away win after he scored in the first half to give the Still Believe lads a 1-0 win against Berekum Chelsea at the Golden City Park.

In Obuasi – AshantiGold came from behind to beat Bechem United 2-1 at the Len Clay stadium. Emmanuel Avornyo opened the scoring for Hunters before John Josiah Andoh and Richard Osei Agyemang wrapped things up for the Miners.

In Sogakope - Konadu Yiadom proved decisive for WAFA as he scored the only goal of the match against Techiman Eleven Wonders at the WAFA Park.

Real Tamale United gave their relegation fight a boost after they pip King Faisal 1-0 at the Aliu Mahama Park in Tamale. Ronald Frimpong scored in the second half to give the Tamale lads a slim home win.

Elsewhere in Accra - Legon Cities and Karela United sold a barren game at the El Wak stadium on Sunday.

Finally, in Tarkwa – Medeama SC came from a goal down to beat Accra Lions 2-1 at the Akoon Park. Darlington Gyan Fosu and Vincent Atinga scored for Medeama while Abdul Rashid Abuakar netted for Accra Lions.