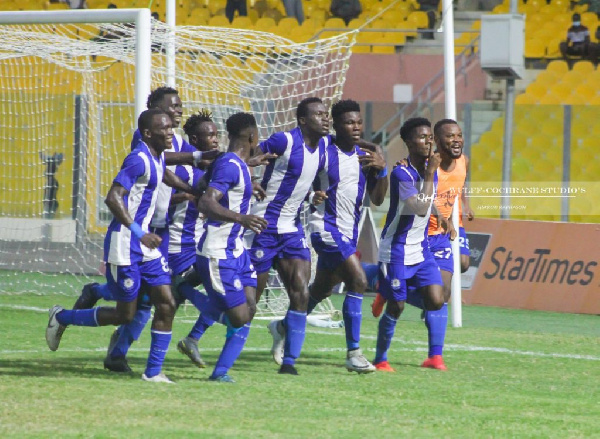 Michael Yeboah made the headlines the last time Asante Kotoko played Great Olympics in December 2020 as his 54thÂ minute header gave Olympics a 1-0 win at the Accra Sports stadium - a defeat that led to the sacking of Maxwell Konaduâ€™s by the Porcupine Warriors.

The two teams have performed incredibly well in the League since that fixture as they occupy the first two spots in the standings.

Asante Kotoko lead the table with 34 points, one point ahead of Great Olympics who dropped to second after the 2-0 loss to Legon Cities.

Great Olympics have won 10, drawn 3 and lost 6 after 19 Premier League matches but their performance against the big boys have caught the eye of many football fans.

Aside Asante Kotoko, the Dade Boys were absolutely impeccable in Accra following victories against Hearts of Oak (2-0), Inter Allies (2-0), Legon Cities (3-0) and Berekum Chelsea (1-0). The two-time League champions have scored 21 and conceded 15 goals in campaign with Gladson Awako, Michel Otuo, Maxwell Abbey Quaye, Samuel Ashie Quaye and Ebenezer Sekyere have had an incredible season putting their best foot forward at all times. Great Olympics will miss Jamal Deen Haruna due to a niggling knee injury.

Asante Kotoko have won two of their last three matches under new coach Mariano Barreto. The 2-0 win against Berekum Chelsea was their first in the second round of the League after drawing with Eleven Wonders on match day 18 in Techiman. Asante Kotoko have found luck at their newly adopted home â€“ Obuasi â€“ picking two wins in two matches against Bechem United and Berekum Chelsea.

The Porcupine Warriors have been dealt a blow as Brazilian play maker Fabio Gama will miss the game due to accumulated yellow cards.

The former Unistar Academy player has started his Asante Kotoko life so well and will lead the front line against Great Olympics on Friday. Habib Mohammed has also impressed in his new role in midfield and would partner Salifu Mudasiru in the heart of the pitch.

Coach Annor Walker and his side will come into the game with confidence having defeated their opponents in the first round.