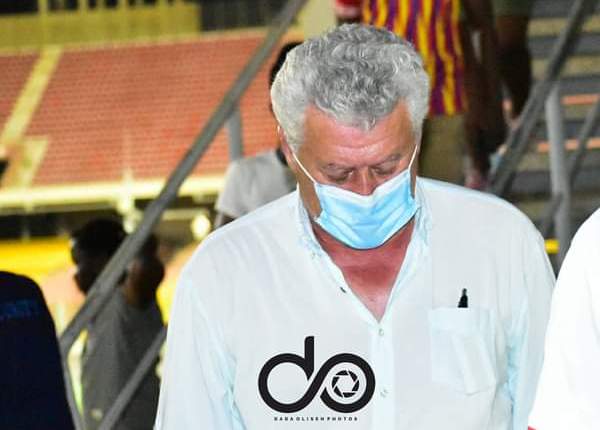 Hearts of Oak head coach Kosta Papic has bemoaned the inconsistency and lack of killer instinct in his team following the scoring draw against Elmina Sharks.

The Phobians were held to a 1-1 draw with by ten-man Elimina Sharks at the Nduom Sports Stadium. Victor Aidoo's second-half header cancelled out James Bissue's opener for Sharks as the two teams shared spoils.

Speaking after the match, the Serbian trainer lamented over his team's lack of consistency.

"Not good enough," he said. "Five of my players were not on the pitch so it was very difficult to win the match."

The Phobians travelled to Elmina with a depleted team following injuries to several of their starters.

"They are still missing that killing instinct. What I said is going to happen, happened. One day we play fantastic and the other day poo," he said.

"Consistency is missing from the football we want to play and in that case it difficult to discuss properly."

Elmina Sharks coach Yaw Acheampong however, was satisfied with the draw but disappointed with the goal they conceded against Hearts of Oak.

"It was a good match. Both teams played very very good," he said in a post-match interview. "Until the red card, so we had to do something to sustain the play. But generally, it was a good game," he added.

"When the defenders started moving, the right half should have covered his line but he didn't and the goalkeeper should have communicated with him too. It was a cheap goal we conceded," said the gaffer.

Hearts of Oak will next host Techiman Eleven Wonders on matchday 9 of the Ghana Premier League while Sharks will make a short trip to Techiman to play King Faisal.