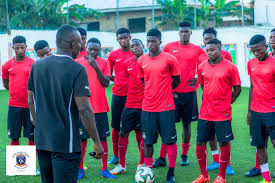 The former Ghana International explained that he allowed some of them to go home when the ban on public gathering which affected football activities was put in place.

He, however, said the junior sides which include the U12 and U14 left camp but the senior sides were kept in camp and quarantined.

"I quarantine all my boys because they are my investment. I decided to let the U12 and U14 go home to their parents and let the bigger guys stay in the academy," he told Joy Sports

The GFA recently announced that the 2019/20 football season remains on hold due to the COVID-19 pandemic.

The season has, since March 16, 2020, been suspended until further notice following government’s ban on all public gatherings.

The FA said the Executive Council further decided that the Association will continue to monitor the situation and would revisit it on June 30, 2020 after a careful assessment and evaluation of the issue and to take further decisions.

The GFA will consider all the factors at the time and take all the necessary decisions to ensure the safety of all participants and the smooth completion of the season.

The Attram De Visser Soccer Academy was founded in June 2010 by Piet de Visser and Godwin Attram. Piet and Godwin started the football academy with the idea to create future opportunities for underprivileged children. They want to achieve this trough football, education and health facilities. The academy focuses on children in Africa and Ghana in particular.

The Attram De Visser Soccer Academy is located in the capital of Ghana, Accra. The sports complex has an artificial field, a living and sleeping area, a restaurant and a pharmacy.