My dream is to play for Asante Kotoko - Richard Boadu 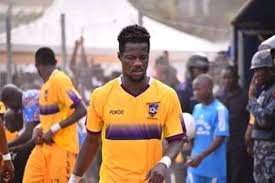 Agadas as affectionately called confessed his love for coach Maxwell Konadu's side, admitting he would love to play for the Kumasi-based side should he leave Medeama.

He admitted that he wants to travel outside but if an opportunity comes from Kotoko it would be a dream to play for them.

“I support a team I play for but Asante Kotoko is a team that I would love to play one day. I was born and bred in Kumasi. Kotoko is a club in Ghana I would like to play after Medeama if I don’t travel outside. ” Richard Boadu told Nhyira FM

When asked who the toughest opponent he faced in the truncated 2019/20 Ghana Premier League, Richard Boadu named AshantiGold James  Akaminko as the most challenging opponent.

According to him, he models his game on that of former Spain and Real Madrid star Xabi Alonso. He played 14 matches for Medeama before the cancellation of the league.