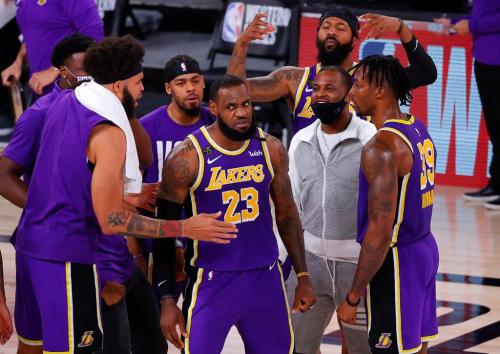 LeBron James is going to a 10th NBA Finals and for the first time in a decade, so are the Los Angeles Lakers.

James recorded his 27th postseason triple-double with a big fourth quarter, powering the Lakers to a 117-107 victory over the Denver Nuggets on Saturday night to win the Western Conference finals in five games.

Rob Pelinka: “Like coach said, our job is not done, we have four more wins to go.”

James finished with 38 points, 16 rebounds and 10 assists to become the fourth player to reach 10 NBA Finals.

Heading into the game, the Lakers were 26-1 when they had a double-digit lead at halftime, with their only loss coming to the Clippers. That statistic seemed in danger as the third quarter closed. Nuggets forward Jerami Grant scored 14 points in the third quarter, picking up for Nikola Jokic, who was sitting out with four fouls.

L.A. held Jamal Murray in check, as he finished with just 19 points, 8 assists, 4 rebounds and 5 turnovers (on 7-17 shooting from the field, including 0-4 from three). Nikola Jokic had 20 points, 7 rebounds, 5 assists and 3 steals in the losing effort.

Now, the Lakers will advance to their first NBA Finals since 2009-10, when they defeated the Boston Celtics to hoist the Larry O'Brien trophy. They will take on either the Miami Heat or Boston Celtics; Miami currently leads the Eastern Conference Finals series 3-2.

"One step closer to the goal. Job not done." - LeBron James