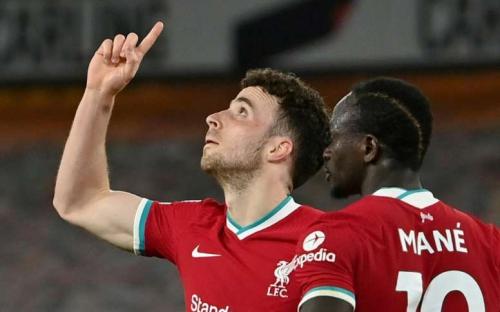 Liverpool breathed new life into their chances of a top-four finish in the Premier League as Diogo Jota returned to haunt Wolves with the only goal in a 1-0 win at Molineux on Monday.

A disappointing night for the hosts ended with a bigger concern than just the result as goalkeeper Rui Patricio had to be stretchered off after 15 minutes of treatment for a head injury after he collided with his own player Connor Coady in the closing stages.

Wolves have already been badly affected by a serious head injury this season. Their top scorer for the past two seasons, Raul Jimenez, has been out since fracturing his skull against Arsenal in November.

The absence of Jimenez means Nuno Espirito Santo's men have missed Jota even more since he joined the English champions for an initial Â£41 million ($57 million) in September.

Jota has also been missed by Liverpool for much of the past three months due to a knee injury that halted his flying start to life at Anfield.

His first goal since returning secured a much-needed three points to move Jurgen Klopp's men up to sixth and within five points of fourth-placed Chelsea.

Liverpool's wretched run of six successive home league defeats is what has left the Reds with an uphill task to qualify for the Champions League next season.

But they have now won six of their last seven games away from Anfield.

Klopp named the same side that bounced back to form with a 2-0 win over RB Leipzig last midweek to reach the quarter-finals of the Champions League.

However, the visitors should have been punished for a slow start as goalkeeper Alisson Becker somehow escaped without conceding a penalty when he crashed into Nelson Semedo after just two minutes.

Semedo then fired too close to the Brazilian with a clear sight of goal on a night when Wolves again paid for their lack of a goal threat.

Liverpool have also struggled for goals in recent months having failed to score in eight of their previous 13 league games.

Sadio Mane's loss of form in front of goal has played a major part in that record and the Senegalese's lack of confidence showed as he overran the ball with just Patricio to beat before seeing his shot eventually blocked.

Mane, though, did have a part to play in the only goal of the game in first-half stoppage time as he exchanged passes with Mohamed Salah before teeing up Jota for a low shot that should have been kept out by Patricio low to his right.

Liverpool's lack of fluency compared to the side that romped to the title last season was even more clear after the break as the visitors were happy to sit on their lead and would have been punished by a more clinical opponent.

Coady headed wide a great chance to score against his former club, while Adama Traore stung the palms of Alisson and Fabio Silva's weak header floated into the gateful Liverpool 'keeper's arms.

But with Jimenez watching on from the stands, even Liverpool's makeshift central defensive pairing of Nat Phillips and Ozan Kabak were not asked serious questions.

Salah had a second goal for Liverpool ruled out for offside five minutes from time. During his attempt to stop the Egyptian, Coady inadvertently caught his goalkeeper.

A lengthy stoppage ensued before the game restarted in the 100th minute and Wolves used a concussion substitute as John Ruddy replaced Patricio.

Despite a nervy finale, Liverpool held out to take advantage of a weekend in which a host of the other contenders for the top four all faltered.