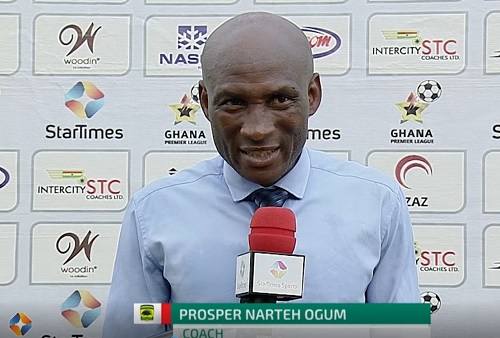 The Porcupine Warriors trek to Tarwka and return to Kumasi will a  win over Medeama at the Akoon Park following goals from Andrews Appau and Frank Mbella.

Speaking after the game, the former WAFA gaffer lauded his players for showing a strong character against Medeama.

“They showed a strong mental character today, the game was played mentally, if you look at how we kept our shape defensively and offensively it was amazing," Narteh Ogum said.

"Discipline was part too, we played the entire second half with a man down so if all it was down to discipline and application of knowledge," he added.

The win gave the League leaders a record - first win over Medeama SC in eight years to put their title hunt back on track.

Kotoko scored two first half goals through Andrew Appau and Mbella Etouga to down the Mauve and yellows.

The Porcupine Warriors went into the game fresh from a home defeat to Berekum Chelsea but it took them only 23 minutes to shoot into the lead in Tarkwa as Appau soared above everyone to head home a corner kick from left back Ibrahim Imoro.

Few minutes later, Etouga fired home the second goal after he was set up by Mudasiru Salifu.

Midfielder Mudasiru Salifu was later red carded after receiving a second yellow card as Asante Kotoko held on to take a 2-0 lead into the break.

Coach Prosper Ogum came back from the break bent on maintaining good composure and resilience with an aim of keeping hold of the two-goal advantage and that paid off as his team rebuffed attempts by Medeama SC to get back into the contest.

The Reds had goalkeeper Danlad Ibrahim to thank as he pulled some spectacular saves to prevent Medeama SC from scoring as the Porcupine Warriors held on to win 2-0 at a difficult terrain.

The victory puts Asante Kotoko nine points clear at the top of the table with 59 points – with a game in hand. Bechem United (50), Medeama SC (50) and Accra Hearts of Oak (47) follow in 2nd, 3rd and 4th respectively.