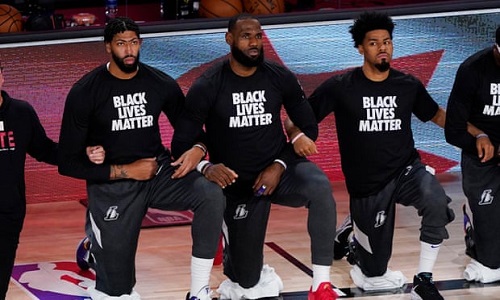 LeBron James, center, and his Lakers teammates take a knee before their game against the Toronto Raptors on Sunday. Photograph: Getty Images
Shares

After the US president said Wednesday that watching NBA players kneel during the national anthem prompts him to “turn off the game”, the LA Lakers star insisted that Trump won’t be missed.

“I really don’t think the basketball community are sad about losing his viewership, him viewing the game,” James said following the Lakers’ 105-86 loss to the Oklahoma City Thunder on Wednesday night at ESPN’s Wide World of Sports Complex in Orlando, Florida. “And that’s all I got to say.”

James, an emerging activist who in June formed a group aimed at protecting African-Americans’ voting rights, was reluctant to directly engage Trump’s Fox & Friends interview in his post-game remarks (“I already know where this could go, where it could lead to for tomorrow for me”), and instead turned the focus on the importance of November’s presidential election.

“I think our game is in a beautiful position and we have fans all over the world and our fans not only love the way we play the game, we try to give it back to them with our commitment to the game. But also respect what else we try to bring to the game and acknowledge it: what’s right and what’s wrong,” James said. “And I hope everyone, no matter the race, no matter the color, no matter the size, will see what leadership that we have at the top in our country and understand that November is right around the corner and it’s a big moment for us as Americans. If we continue to talk about, ‘We want better, we want change,’ we have an opportunity to do that.

“But the game will go on without his eyes on it. I can sit here and speak for all of us that love the game of basketball: We could [not] care less.”

James had 19 points and 11 rebounds for the Lakers (51-16), who had another possibly concerning offensive performance while dropping to 2-2 in the bubble. Los Angeles, who have already clinched the top seed in the West and the Pacific Division title, never held a lead for the first time all season.

“I think we had some great possessions,” James said. “I think sometimes we have some bad shot selection throughout the course of these games, but I think we got some great looks. Our defense is pretty good. We only allowed the Thunder to shoot 43% from the field. We’ll get our rhythm and start making some.”

The Lakers went a season-worst 5 for 37 on three-pointers and made only 35% of their shots overall. Los Angeles dropped two games behind Milwaukee for the NBA’s best overall record, which won’t provide a real home-court advantage in the NBA finals this year.

“We’re building habits, and every time we’re out there we have a chance to build and find rhythms,” Lakers coach Frank Vogel said. “These games are still really important for us to do that.”

READ ALSO: 'It is a dream to work with Guardiola' - New Man City signing Ferran Torres

Most players and coaches, but not all, are kneeling while pre-recorded versions of the national anthem are being played as the NBA restarts its season in an isolated bubble at Walt Disney World.