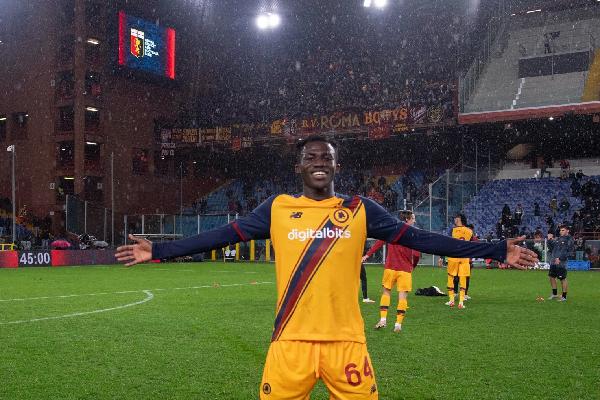 Former Black Stars captain Asamoah Gyan says AS Roma prodigy Felix Afena-Gyan should not be rushed into the senior national team set up.

The 18-year-old has been the talk of the town after being handed his debut by Jose Mourinho last month.

He was invited for Ghana's World Cup 2022 qualifying matches against Ethiopia and South Africa, having made only two first team appearances for Roma at the time.

READ ALSO: Who is AS Roma revelation Felix Afena-Gyan?

However, the youngster turned down the opportunity to focus on his development at the Italian club.

“I felt it was too early for me to answer the call from the national team because I need to grow, physically but also mentally and psychologically” Afena-Gyan told Gianluca Di Marzio.

“I also thought it was important for me to stay in Trigoria to accumulate training under [Jose] Mourinho’s orders, to continue improving and growing.

“I have a lot of respect for my national team and I hope to be part of it in the future. The coach asked me if I would go and I told him I didn’t feel ready yet. But it was my decision. I thought it was premature for me to take such a step.”

This Ghana legend Asamoah Gyan believes it was the right call.

"He is a very good player [but] I don’t think we need to rush Afena-Gyan. Whenever he comes on, he makes an impact but he needs time to play consistently, start games, build confidence, then he will be ready for the national team,” Gyan told Asempa FM.

"I have watched all his games he has played and I think he is the future for the Black Stars but we must admit that he is young and we must not rush him.

"Let us allow him to join the team at the right time. He has been impressive but rushing him into the Black Stars will not be helpful.

"I think he not joining the Black Stars was based on bad intension because I think he wants to develop himself and stay focused as well but I believe he will surely join the team at the right time with proper integration.”

The Giallorossi were struggling badly to create genuine scoring opportunities at a rain-drenched Stadio Luigi Ferraris, until 18-year-old Felix Afena-Gyan came off the bench and made all the difference.

After the match, Jose Mourinho honoured his promise by buying a pair of boots.

“I had promised to buy Felix the boots he really likes, which are really expensive, they cost €800, so he ran over and told me not to forget! Tomorrow morning, the first thing I do is buy him the boots,” Mourinho told DAZN.

“I am sorry for Mister De Rossi and the Primavera squad, but Felix will stay with us. The Primavera work close to us, so Felix and another four or five players have come across to the senior squad.

“What impressed me the most was his cool head in front of goal. If he is not in terms of technique fantastic, he does have a strong mentality.

“You get these kids now who think they know everything, but he is humble and you can sense he just absorbs all this information from everyone around him. That’s fantastic.”