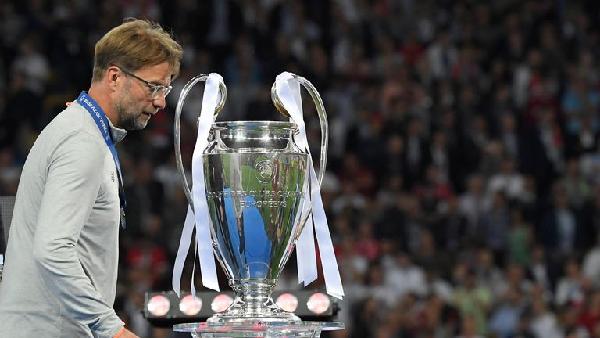 Liverpool manager Jurgen Klopp has criticised the authorities who initially blamed the club's supporters for issues around the Champions League final in Paris.

Supporters described heavy-handed policing, organisational chaos and overcrowding at the game on 28 May.

The match was delayed when long queues of Liverpool fans built up outside the stadium in Paris.

A French senate report into the chaos is set to be released this week, amid claims it will cite "multiple organisational failure" ahead of Real Madrid's 1-0 win.

The chaos - and the initial French response seeking to blame fans for the trouble - has prompted uproar in France, as well as in the UK and Spain.

Speaking to BBC Sport ahead of his side's pre-season match with Manchester United in Bangkok on Tuesday, Klopp said he was told before the final that it was being delayed due to problems caused by Liverpool fans.

Klopp says lessons have to be learned.

"It was definitely not right," he said of the initial rush to judgement.

"Before a game I don't usually exchange a lot of messages. But the coaches were saying 'our families are still outside'. Then the game is delayed, the Uefa guys pass and say 'it's because of your fans'. That's the information you get, but you don't know anything.

"So next morning, we pick newspapers and all of a sudden it's 'Liverpool fans did this' and you think 'Wow, how is that possible? What are they talking about?' Because all the information I got immediately was if the Liverpudlians had not been as calm as they were, it could have been completely different, so much worse than it was, when it was already really bad.

"How can you deal with it? How can they go outside right away and tell you something is 100% true? You have to wait for all these different steps.

"Obviously now, step by step, we get more information about how it really was and who was really responsible. How could it have happened?

"Everybody needs to know about it, not because it will change anything for this game. But it has to be changed for the next games and for big events, wherever it will be because supporters have to be protected."

Liverpool enjoyed a stellar season last term and were in with a chance at completing an unprecedented quadruple until the final week of the season.

After a squad reshuffle that has seen forwards Sadio Mane and Divock Origi replaced by £64m former Benfica star Darwin Nunez and 19-year-old Fabio Carvalho, who has joined from Fulham, and Mo Salah commit his long-term future to Anfield, Klopp's side are still viewed as the most likely to prevent Manchester City achieving a hat-trick of Premier League titles.

A winter World Cup in Qatar means the Champions League group stage is being squeezed into a nine-week gap rather than the usual 13. And, in England, anyone playing in the World Cup final on 18 December, will be able to return to Premier League duty eight days later on Boxing Day.

"Uefa and Fifa have to be careful with what they both really want," said Klopp. "If you have tired players in tournaments, you don't have high quality.

"And the Premier League has to think as well. One week, you become world champion, for example, England, hopefully. And then one week later, on Boxing Day everybody expects you to be ready again. That never happened before in the history of football.

"Usually after every tournament you have a long a break. This time you play again one week [later]. Madness.

"People tell me I'm a moaner or whatever, but everyone knows it is not perfect.

"For some, there will be a pre-season for the long second part of the season, which is good. But the more players who are involved (in Qatar) it would be outstanding. How can you plan for that? It has never happened before.

"I have said it so often, and obviously nobody really listens, we have to make sure that we give the boys enough time to rest. Now we have five substitutes, which is absolutely crucial and great news.