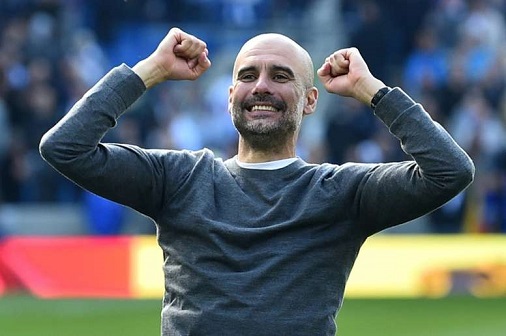 On Monday, the Court of Arbitration for Sport (CAS) cleared City of committing "serious breaches" of Financial Fair Play regulations between 2012 and 2016.

"What we have done is right. Jose and all the managers should know that we were damaged," said Guardiola.

"We should be apologised (to).

"[I'm] incredibly happy for the decision, which shows what all the people said about the club was not true and to defend on the pitch what we won on the pitch.

Uefa had issued Man City with a two-year ban in February.

In this year's Champions League, City face Real Madrid in their last-16 second leg at Etihad Stadium on 7 August. They lead 2-1 from the first leg and will face Juventus or Lyon if they progress.

When asked about his future with last season's Premier League champions, Guardiola said he was "happy" but added "now is not the time" to discuss a new contract. His current deal runs until the end of the 2020-21 season.

"We have made a step forward in 10 years. We invested a lot of money, like a lot of clubs. We did it the right way. We have not been banned because we followed the FFP rules. If we hadn't we would have been banned," Guardiola added.

"We showed it was not true. That's why people have to be happy or should at least accept it.

"I would love to say, 'look in our eyes and say something face to face and go out onto the pitch and play as rivals and after if you beat us, we will shake hands and congratulate you'."